EPA scientists use spiders to track contaminants across ecosystems. 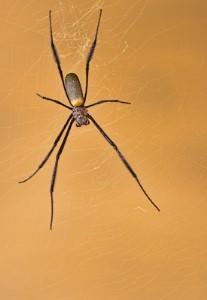 EPA scientists have tapped unique “data collectors” in an innovative method of tracking the movement of contaminants across ecosystems: spiders.

Contaminants can be spread through and across ecosystems via the food web. If a bird eats an insect from a contaminated aquatic ecosystem, contaminants (which may have accumulated in the insect’s tissues) are introduced to the bird’s terrestrial ecosystem.

The scientists found that the spiders’ position as both predator (it often feeds on emerging aquatic insects) and prey (birds and other land-dwelling creatures feed on it) makes it an ideal indicator to use to track contaminants moving across ecosystems and through two different food webs. Scientists are using data from the spiders as part of long-term efforts to monitor and study the movement and remediation of polychlorinated biphenyls ( PCBs).

Following on the success at Lake Hartwell, the scientists are also sampling spiders at Manistique Harbor (MI) and Ottawa River (OH), sites with contaminated sediments and ongoing clean up and research operations.  Using the new method, they can gain a better understanding of how contaminants migrate through the food web and the ecosystem, key information for more accurately assessing and managing environmental risks to humans and wildlife.

For more on the work at Lake Hartwell, SC, see the video:  Lake Hartwell: Tracking the Movement of Contaminants through Ecosystems  Exit