Expansive views of land across water, gulls cawing, water lapping on the rocks: this is Long Island Sound. Despite its proximity to New York City and other major urban areas, a diverse array of aquatic and terrestrial ecosystems dot this narrow land that stretches out toward the Atlantic Ocean.

The unique geography of Long Island Sound presents an interesting challenge for scientists. For example, the cooler surrounding waters trap regional air pollutants above the water. As temperatures rise, the breeze pulls this pollution inland. This leads to high ground-level ozone concentrations along the shorelines of New York, Connecticut, and Rhode Island. Although ozone levels have decreased in recent years, they still persistently exceed National Ambient Air Quality Standards (NAAQS). 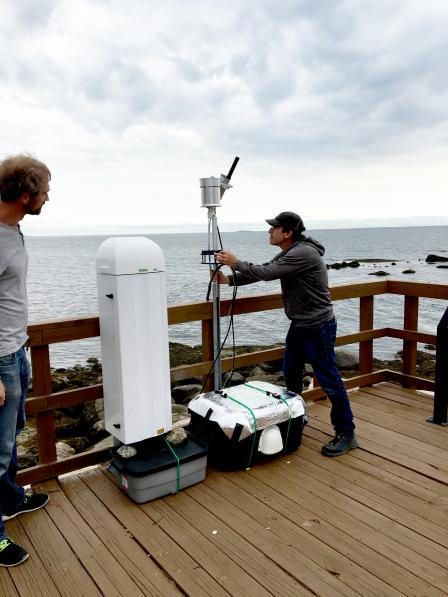 David Williams and Luke Valin at the U.S. Fish and Wildlife Service Outer Island, CT site. David is installing a spectrometer and the large white instrument is a ceilometer.EPA scientists are collaborating in a multi-agency field study from June to September 2018 to better understand the complex interaction of emissions, chemistry, and meteorological factors contributing to these high ozone levels along the Long Island Sound shorelines. The Long Island Sound Tropospheric Ozone Study (LISTOS) includes researchers from state and federal agencies and academia with expertise in collecting aircraft-, satellite- and ground-based air quality measurements.

The study will provide valuable data and resources to state air quality managers as they develop strategies to control ozone pollution, and reduce and eliminate NAAQS non-attainment areas.

As part of the study, EPA scientists are using a variety of advanced instruments at sites surrounding Long Island Sound to measure compounds such as nitrogen dioxide, formaldehyde, and carbon monoxide, which react in the atmosphere in the presence of sunlight to form ozone. Other compounds, including carbon dioxide, sulfur dioxide, and particulate matter, are being measured to better understand emission sources.

“As our instruments continue to advance, EPA is learning more about ozone formation near the ground and aloft,” says Jim Szykman, who leads EPA’s work on the project. “Ultimately this enables states to have a better sense of how to most effectively protect people and the environment from harmful ozone levels.”

Specific instruments being used include:

By using various instruments to measure ozone precursors on both the ground and in the atmosphere, researchers can determine the height at which precursors are mixing and the ease at which pollutants might move across a region.

In addition to EPA’s ground and satellite work, University of Maryland and NASA are flying aircraft fitted with instruments that measure nitrogen dioxide and formaldehyde in the atmosphere. University of Maryland will fly its aircraft over the study area when there is a high-ozone episode during the research months, and NASA will use its aircraft throughout the summer to gather data to better understand ozone formation and nitrogen dioxide emissions.

Setup of instrumentation and data collection for this study began in June and will continue through September 2018. A workshop is planned for early 2019 to discuss LISTOS and its initial findings. 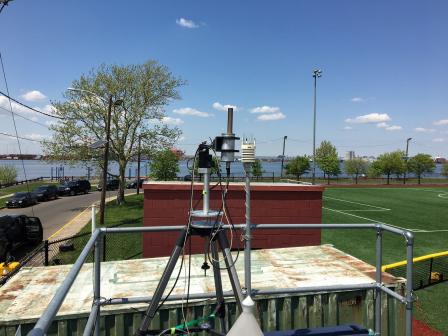 This is on the top of the New Jersey Department of the Environment Bayonne, NJ air quality monitoring shelter with a spectrometer and weather station.The Northeast States for Coordinated Air Use Management (NESCAUM) is organizing the study, with additional funding from New York State Energy Research and Development Authority and National Fish and Wildlife Foundation to support the participation of University of Maryland, College Park; University at Albany-State University of New York; Stony Brook University; and City College of New York.

“Air pollution in the New York City area and over Long Island Sound is complex and dynamic on a daily basis,” said Dr. Paul Miller, Chief Scientist at NESCAUM. “The LISTOS effort is helping address a difficult public health problem that affects over 20 million people living in the region.”

By Air, Land, and Sea: Tackling the Ozone Issue on Lake Michigan’s Shores

NASA Joins Effort to Sniff Out Ozone in the Northeast