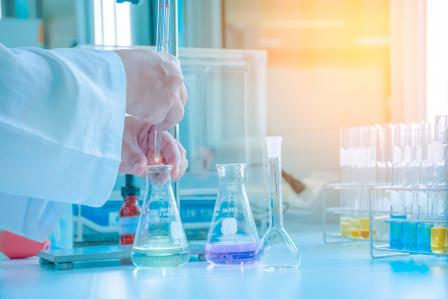 EPA scientists are leading a multi-phase project to evaluate the ability of non-targeted analysis laboratory methods to consistently and correctly identify unknown chemicals in samples. EPA’s Non-Targeted Analysis Collaborative Trial (ENTACT) was formed in late 2015 and includes nearly 30 academic, government, and industry groups. Non-targeted analysis involves analyzing water, soil and other types of samples to identify unknown chemicals that may be present, without having a preconceived idea of what chemicals may be in the samples.

“One of our main goals is to figure out what scientists are doing with non-targeted analysis as a group at large, particularly which chemicals we correctly identify and why,” says Elin Ulrich, an EPA scientist who co-leads ENTACT with EPA’s Jon Sobus.

To conduct the study, the ENTACT team used about 1,200 chemical substances from EPA’s ToxCast library to make 10 liquid mixtures containing 100-400 compounds each. Three types of samples were also used in the study: house dust, human serum (a component of blood), and silicone wristbands. The samples were each spiked with one of the 10 liquid mixtures.

The dust and serum samples were obtained from the National Institute of Standards and Technology (NIST) and are certified standard reference materials. Oregon State University prepared the wristbands by uniformly exposing them to outdoor air to allow them to absorb airborne environmental pollutants.

These different types of samples were then sent to approximately 25 labs where workers were instructed to use their own non-targeted lab methods to analyze the samples, and to report back to EPA what chemicals they believed were in the samples.  This phase of ENTACT began in September 2016.

“The labs used whatever instruments, software, and workflows they wanted to analyze the samples,” Sobus said. “Some used up to four different methods.”

The labs are returning their information to EPA using a standardized format that will allow comparison of results between labs.

As labs send back their findings, EPA scientists unveil the chemicals present in each sample so that participants can evaluate what they correctly or incorrectly identified, or didn’t detect.

“ENTACT is not focused on which lab had the most matches,” says Sobus. “It’s about determining which non-targeted analysis methods work best so that everyone’s research improves.”

Phase 2 of ENTACT started in June 2017 and has been completed by several groups.

The ENTACT team shared the entire EPA ToxCast library of chemical substances (about 4,700) with five participating lab instrument vendors. Vendors are analyzing each substance separately and creating a database of what these 4,700 substances look like on their equipment. Once the database is complete, it will be made publically available. Then, when labs around the world use non-targeted analysis to screen for ToxCast chemical substances in samples of their choosing, they can compare their own results with those in the database.