Evaluating the Effectiveness of Vacant Lots as Green Infrastructure in Buffalo, NY

Rainfall replenishes water supplies and keeps our urban landscapes looking green, but even small storms can cause localized flooding and inundate sewer systems. It’s a problem that the City of Buffalo, New York, knows all too well. Buffalo has a combined sewer system that is designed to collect both wastewater and stormwater in a single pipe and send this combined flow to a treatment plant. As in many cities, stormwater reduces the capacity of the sewer system, and this often causes what’s called a combined sewer overflow (CSO). These overflows introduce pathogens, like bacteria, and a host of chemical pollutants to receiving waters. These pollutants impair water quality throughout lakes, rivers, streams, and groundwater resources, where fish and other aquatic organisms are impacted by, for example, anoxic conditions (i.e., depleted oxygen levels) that can be caused by the high demand for oxygen that is due to the makeup of  CSO pollutants. 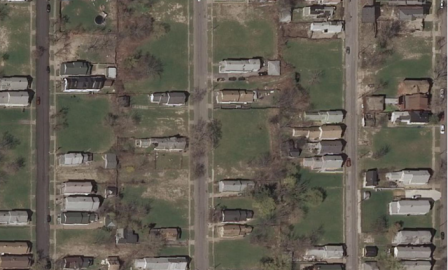 Bird’s-eye view of an urban residential neighborhood.EPA researchers are working with the Buffalo Sewer Authority, the University of Buffalo SUNY, and EPA’s Office of Water to tackle the problem with the help of an unlikely resource: vacant lots. The team is helping determine the extent to which vacant lots around the city can function as green infrastructure by absorbing and filtering stormwater. Every vacant lot can play a role in soaking up stormwater, but the question is, just what is this role? When combined, these thousands of vacant lots will reduce the amount of stormwater that otherwise rushes into sewers during storms and contributes to triggering these overflow events.

“We worked with the City of Buffalo to develop a protocol that would enable them to go in after they’ve demolished a property, and determine if what’s left (the vacant lot) will help the city achieve its stormwater control objectives,” said EPA’s research lead on the project, Bill Shuster, Ph.D. “The Buffalo Sewer Authority has been really proactive in getting actual field data to determine the extent to which these vacant lots are soaking up rainfall.”

Here’s how the process works. After a vacant or abandoned building was demolished, the Buffalo Sewer Authority used this protocol to collect a consistent dataset to determine the potential of a vacant lot to absorb water and provide feedback to demolition contractors on how to improve their demolition practices. The protocol is flexible in that any city could use it to achieve the same objectives. The protocol guides the user through five different areas of assessment that comprehensively describe the vacant lot in terms of its environmental performance. One of the innovative aspects of this protocol is that it is available as a tablet “app”: the user is walked through the different assessments, and the data is sent to a central database in real-time. 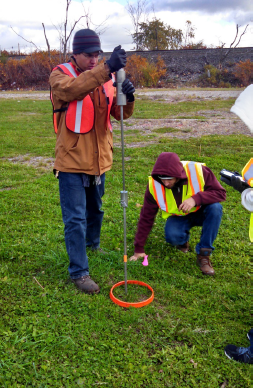 For example, the protocol asks for information on adjacent property land use, the type of vegetation present, and the slope of the land. Users are also instructed to take a plug of soil (also called a soil core), at the site to determine what the approximate texture of the soil is (is sandy, clayey, etc.), which is then photographed and the data recorded on the checklist. The data and results of these vacant lot assessments can be used to assess large numbers of lots for their potential to absorb and potentially filter stormwater. The database can also be used to determine which sites provide the largest benefit in terms of stormwater retention, and target resources to best manage hotspots around the city first.

The protocol grew out of work that Dr. Shuster and colleagues have been doing over the past seven years to assess urban soils. They looked at twelve cities across the country to get basic data and information on what types of soils are found in urban environments, how the demolition process impacted soils in some of these cities, and what types of benefits communities can expect from them.

“These technical assistance efforts give straightforward guidance to municipalities. They require a minimum investment in equipment and training to gather datasets that are rich in telling the city what their urban landscapes can do, and what their limitations are. It’s a way to touch the landscape in a structured way,” says Shuster.

Currently, Dr. Shuster, Dr. Heather Golden (EPA), and Dr. Christa Kelleher (Syracuse University) work together with the Buffalo Sewer Authority to leverage this data toward understanding how well Buffalo vacant land acts as a sponge, and what kinds of storms drive these landscapes into producing runoff.

This ongoing work is part of a larger effort by the City of Buffalo to reduce sewer overflows. In 2014, the Buffalo Sewer Authority developed a plan that includes projects like green infrastructure, optimizing system storages through real time control, and upgrading ageing parts of the wastewater treatment system, with the goal of improving water quality in the service area that will have benefits for both Buffalo ratepayers and for maintaining the quality of the Great Lakes.