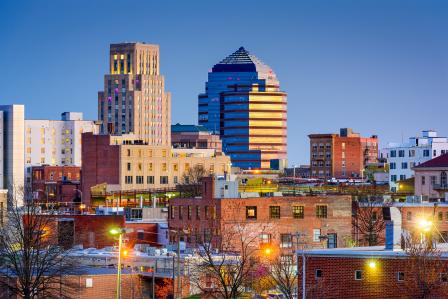 Durham, North Carolina is a growing urban area. In the 1930s, the city of Durham, North Carolina went on a tree-planting spree, adding about 13,000 trees across the city. Their primary tree of choice: the Willow Oak. The oaks of Durham have kept city inhabitants shaded for nearly a century now. Unfortunately, their long lives are coming to an end and the aging trees are no longer providing the same benefits to the community that they once did.

Trees are an important part of city planning, especially for a rapidly growing area like Durham. Urban areas can suffer from environmental problems such as stormwater runoff contaminating local waterways and air quality issues from vehicle emissions. Trees help mitigate these issues by absorbing some of the pollution from these sources. In addition, trees provide shade for pedestrians; their aesthetic properties can also reduce stress and improve social connectedness.

As part of the Trees Across Durham initiative, the City of Durham is dedicated to planting 1,500 trees per year between 2019 and 2026. But where should the trees go? That’s where EPA stepped in to help. The Durham Urban Forestry Department requested EPA’s assistance to develop a plan that would prioritize where to place each of the 10,000 trees to maximize the benefits the trees would provide to the community.

A team of EPA researchers began by identifying the number of sites eligible for tree planting—all the places for which the City and County of Durham have jurisdiction, that also have enough space to be home to a mature tree and aren't already occupied by tree cover, impervious surfaces, or water. To complete this analysis, EPA researchers used EnviroAtlas, a public, online suite of interactive tools that allow users to discover, analyze, and download data and maps related to ecosystem services–the benefits people receive from nature.

To estimate where the trees would provide the most benefits, the team of researchers selected four common objectives that may be achieved through tree planting. The first two address the mitigation of hazards—stormwater runoff and traffic emissions. The second two involve social factors—prioritizing vulnerable populations and enhancing the pedestrian environment.

To evaluate the need to mitigate stormwater runoff, the researchers looked at areas in the city with the most impervious surfaces. These types of surfaces—like roads and parking lots—do not absorb rain and can also contribute to polluted runoff. They could use the help of trees to absorb and filter runoff so it doesn’t end up in local waterways.

To evaluate the need to mitigate traffic emissions, the researchers ranked the city roads based on the speed of cars on the road and whether or not trucks use the road. Roadside vegetation like trees can help reduce the health effects of air pollution from traffic emissions by acting as a barrier between the road and people walking or living near it.

Finally, the researchers looked at the city’s sidewalk coverage to determine where tree canopy would improve conditions for walking. Increasing tree cover along walkable roads would reduce the heat island effect and thereby promote pedestrian use.

Each of these objectives was first evaluated individually; this led to four sets of recommended locations with limited overlap. However, when the researchers combined the objectives, they were able to create a prioritization plan that met the largest proportion of estimated regional need for the benefits that the trees would provide.

Based on this analysis, the City of Durham has implemented a seven-year plan to plant the 10,000 trees in priority neighborhoods.