Tourism and recreation are critical to the economy and communities of Cape Cod, Massachusetts, and the key to tourism on the Cape is a sunny day spent on the beach. That means that when a beach is closed for the day due to bacteria levels in the water, town managers, residents, and out-of-town visitors all take notice.

Local communities need data to help them decide the best way to address the issue of beach closures.  To help fill in this data gap, EPA researchers are conducting a multi-part study to understand how people respond to beach closures and worsening water quality. 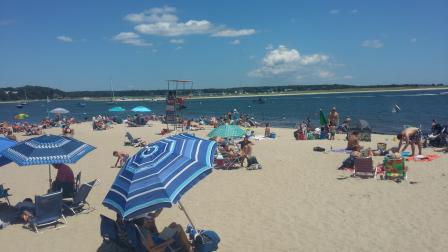 Loop Beach in in Barnstable, Massachusetts. One key part of understanding the impact to communities is finding out the economic costs of beach closures on the Cape. Researchers began by calculating the per-person cost of a closed beach for the town of Barnstable, Massachusetts, using a formula created by combining results of previous economic studies from across the United States. This per-person cost was combined with a modeled estimate of visits to beaches. Using this formula, EPA found that combined, four of the beaches in Barnstable are worth at least $4.3 million a year to visitors, and beach closures that fall on popular days and locations can result in losses of more than $15 thousand per day. This shows that beach closures can have a significant cost to towns on the Cape and elsewhere.

While estimating the cost of beach closures is an important part of understanding the value of beaches to Cape Cod, there are many ways people decide how to use their recreational time. That’s why EPA has sent a survey on beachgoing and other coastal recreation to residents across much of New England.

“The survey is trying to get a profile of the population and how they use coastal resources,” says EPA scientist Nathaniel Merrill, “but also to get a more nuanced understanding of how they’re choosing where to go and what goes into that, and how water quality might affect that part of their life.”

The survey not only asks beach visitors about their feelings on bacteria-related beach closures, but also on a variety of other factors, such as seaweed growth and beach appearance. Fertilizer and sewage runoff contain high amounts of nitrogen and phosphorus, which can cause fish kills and excessive plant growth. The EPA research team wants to learn exactly how these other issues influence New Englanders’ decisions about going to the beach.

“There are a lot of outputs from that survey that can be wrapped up into information that’s sort of missing, especially about the coastal nutrient loading issues,” Merrill added. EPA plans to use these results to help develop a set of simple methods so towns across the United States can estimate visitation to and value of their coastal resources.

Once data is collected from the survey, EPA will share the results with stakeholders in the region such as the Cape Cod CommissionExit, who identified beach closures as a major area of missing data.

“For Cape Cod, water recreation is a huge component of their culture and of their economy,” adds researcher Kate Mulvaney, and “having that information as they’re going through a policy process is just a way of making it much more understandable.”