How Science is Protecting the Air We Breathe 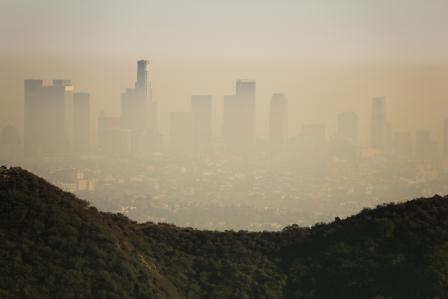 Smog in Los Angeles, California. EPA has been at the forefront of providing the science to protect the air we breathe since 1970, when the Agency was established. Fifty years ago, air pollution (smog) was a visible problem. These high air pollution concentration days resulted in respiratory problems and illnesses and sometimes hospitalizations and deaths.

In 1971, EPA announced the National Ambient Air Quality Standards (NAAQS) on six common air pollutants under the Clean Air Act. Currently, the six criteria pollutants are ozone, particulate matter, carbon monoxide, lead, sulfur dioxide, and nitrogen dioxide. Critical research by the Agency and others have supported the review of the standards and offered the science to implement them by the states.

EPA formed a multidisciplinary research program to support the NAAQS that focused on studying how people are exposed to pollutants, what the effects are from exposure, what sources were causing increased emissions, and how emissions could be effectively reduce or mitigated. The Agency established research laboratories in Research Triangle Park, NC, which still serve as a national center for air pollution research and policy. In nearby Chapel Hill, on the campus of the University of North Carolina, EPA set up labs to coordinate research on the health impacts of air pollutants.

Some of EPA’s earliest air pollution research investigated the photochemical reaction of chemicals emitted by the burning of fossil fuels from vehicles and industrial sources. On warm days, the interaction between sunshine and some air pollutants provides conditions to produce ozone. Ground-level ozone, also referred to as smog, became a health problem in many cities, such as Los Angeles. This air pollutant irritates the throat, and was shown to lead to respiratory problems in children and adults, that sometimes resulted in hospitalizations.

Ongoing ozone research in the 1980s and 90s helped to improve understanding of the health effects of the pollutant and contributed to the revision of the air quality standard for ozone in 1997. Research over the next two decades showed a  strong relationship between ozone concentrations experienced during the course of the day and impaired lung function. This and other findings supported additional revisions to the ozone standard.

Another air pollutant, particulate matter (PM), also referred to as soot, is also a public health hazard. The first PM standards in 1971 focused on all particles suspended in air from a variety of sources.  Then, in 1987, EPA revised the standard after research showed a specific size or “fraction” of PM called PM10 could enter the lungs. Eventually, mounting scientific evidence indicated potential health impacts due to tiny particles that are approximately 30 times smaller than the human hair, called fine particulate matter (PM2.5), which can travel deep into the lungs. These particles are primarily generated from vehicles, industry, wildfires, and other combustion-related sources.

EPA issued the first air quality standards for PM2.5 in 1997 based on scientific findings that exposure to fine particles can lead to respiratory effects and even death.  As research progressed, evidence revealed that PM2.5 could also lead to cardiovascular effects. Studies continue to improve EPA’s understanding of the relationship between PM2.5 exposure and health effects, with a focus on those who may be most at-risk of health effects.

EPA researchers continue to support the  review of the NAAQS with Integrated Scientific Assessments (ISAs) by evaluating the latest scientific findings on the health effects from air pollutants.

As the air quality standards were developed over the years, the need for ways to reliably and consistently measure emissions became apparent.  EPA researchers began studies to develop and advance air quality measurement capabilities. In 1998, researchers published a Federal Reference Method for measuring PM2.5 that assists states with implementing the NAAQS. Many Federal Reference Methods (FRMs) and Federal Equivalent Methods (FEMs) have been developed and evaluated by EPA researchers for air quality measurement since then. These tests and other monitoring methods are essential to air quality management.

More recently, EPA has been actively leading research to further develop, evaluate, and implement the use of a wide array of Next Generation Emission Measurement approaches and technologies for regulatory and non-regulatory purposes, including lower-cost, portable air sensors.

EPA has been at the cutting edge of atmospheric modeling as computing technology advances  have been achieved. In 1998, researchers released the first version of the Community Multi-scale Air Quality (CMAQ) modeling system, which provides fast and technically sound estimates of ozone, particulate matter, toxics and acid deposition. CMAQ is continually updated and peer reviewed on a regular basis. It is used worldwide to support air quality management.

CMAQ also helps individuals learn about their air quality. The model played an important role in the development of the first national air quality forecasting capability by EPA and the National Oceanic and Atmospheric Administration. This led to the development of AirNow.gov, a multi-agency resource that provides current and forecast air quality maps and data for more than 500 cities in the U.S.

The ongoing study of air pollutants and the development of technology to measure, monitor and model emissions has led to improved air quality in the United States. Over the last 50 years, criteria air pollutants in the United States have been reduced by 74 percent leading to cleaner air for Americans. EPA research continues to provide solutions to air quality management challenges by states and tribes, investigate air quality issues such as wildfire smoke, and inform the public of potential health risks with research to improve public health communications. This science continues to provide the foundation for protecting the air we breathe.

Smog, Soot, and Other Air Pollution from Transportation