Keeping Fertilizer in the Ground and Dollars in Farmers’ Pockets

When fertilizer is applied in amounts greater than can be absorbed by crops and the land, nutrients can move beyond their intended use, wasting farmers’ 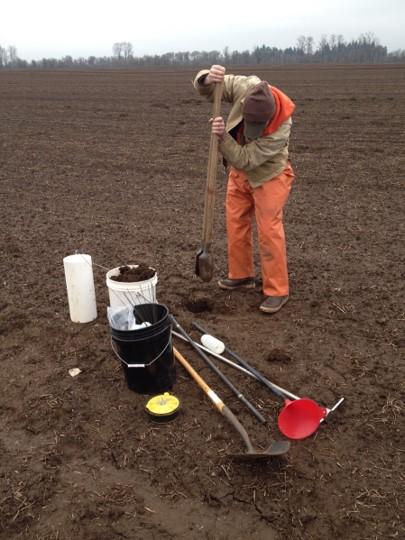 Biologist Blake Hatteberg installs a lysimeter, which is a  device that allows the collection of soil water and measurement of nitrate leaching to groundwater.  money and impacting ground water and surface water across the country. This type of nutrient pollution is widespread, costly, and a challenging environmental problem. In the southern Willamette Valley, Oregon’s agricultural hub, fertilizer-derived nitrogen leaching from farm fields has led to local private drinking wells having nitrate levels that exceed EPA’s national primary drinking water standards. Research on nutrient efficiency management was needed to improve water quality and help Oregon farmers reduce their already large annual expenditures on fertilizer.

“Over the years a unique partnership among local citizens, and various local, state and federal agencies has allowed a better understanding of the sources and extent of the nitrate problem in the southern Willamette Valley Ground Water Management Area,” says Alan Henning, an environmental scientist at EPA’s Region 10, which covers the Pacific Northwest and Alaska.

In 2013, scientists at EPA’s National Health and Environmental Effects Research Lab’s Western Ecology Division (NHEERL/WED) – in partnership with EPA Region 10 staff, the Oregon Department of Environmental Quality (DEQ), local farmers, county soil and water conservation districts, the U.S. Department of Agriculture, and community leaders – began an innovative field study to improve nutrient management and help farmers economically. The purpose of this study was to examine the influence of certain crops and nutrient management practices on nitrate leaching into ground water. Building on foundational research done by Oregon State University in the 1990s, the team compared practices and nitrate leaching rates over time until 2017.

In 2014, nine local growers allowed the team to study their farms and shared information about their nutrient management practices. Researchers measured nitrate as it moved into the soil below the roots. They evaluated soil before fertilizer was added and after crop harvest in order to observe how much fertilizer is used by growing crops, how much is left over in the soil, and whether it has potential to leach into ground water. To capture a wide range of current nutrient management practices, a variety of crops were selected for the study, including blueberries, grass seed, wheat, sweet corn, and peppermint. 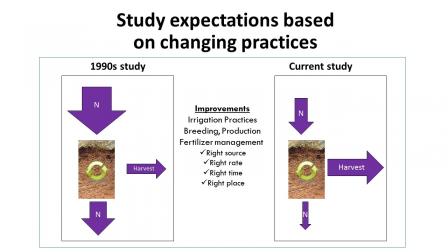 Hypothesized differences between current and past nitrogen management practices in the southern Willamette Groundwater Management Area.  “One of the most exciting things about working at DEQ,” said former Oregon DEQ Director, Dick Pedersen, “is seeing different interests come together to solve environmental problems. This is an incredible and innovative example of that.”

Soil data gathered from local farms, coupled with historical data provided by the university, helped the team determine best practices to minimize nitrate leaching while maintaining crop yields. For example, high levels of nitrate were found in previous studies of peppermint fields in the 1990s. The current study suggests that improvements in irrigation and fertilizer practices have resulted in less nitrate leaching from peppermint fields.

In the southern Willamette Valley, there are a number of options for improvement. Nitrate leaching occurs mainly during rainy seasons between October and March – so fertilizer should be applied cautiously during this time since it is washed away faster than the plant can use it.  Separate timely applications of fertilizer, particularly for grass seed, provide nutrients when the crop needs it most and allows farmers to maintain good harvests while saving on fertilizer. Cover crops, such as legumes, can be planted in the same field before or after harvest of the primary crops, such as corn or vegetable seed. These cover crops can continue growing to capture leftover nitrate in the soil during the rainy season.

In 2017, as one of EPA’s Innovation Projects to address regional and state science priorities, the team provided farmers with periodic updates summarizing leaching results from the farmers’ own fields, including soil analyses and trends over time. This information shows the relationship between farmers’ current agricultural practices and nutrient leaching. The complete analysis, which began in 2014, will be shared with the farmers in 2018. During that spring, the team will interview farmers to understand how they are using the nutrient data and how it has impacted their nutrient management practices. The results will help guide the agricultural community to determine the most effective ways to provide information to farmers to help them reap the economic and environmental benefits of improving nutrient management practices and maintaining the quality of their water.