To Leave or Not to Leave: The Heart Cockle and Green Macroalgae Blooms

Most ecological studies have their challenges, but EPA researcher Ted DeWitt and his colleagues ran into a new one: the mollusks they were studying kept escaping the experimental enclosures they set up. 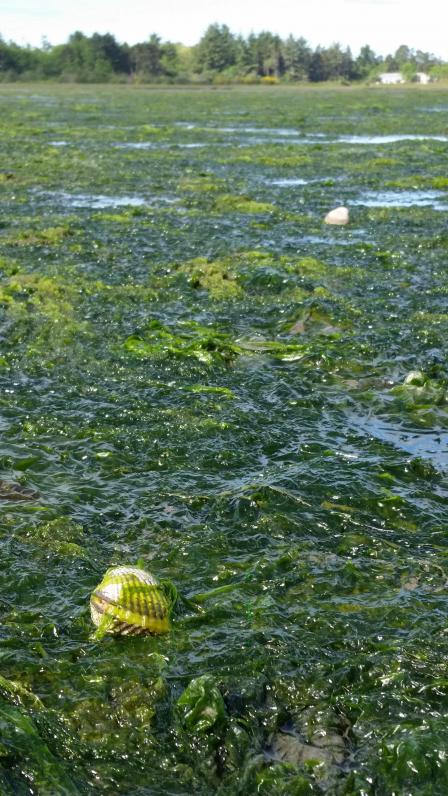 Summertime low tides expose cockles that have emerged from the sediment to the top of a thick macroalgae mat in Yaquina Bay, OR.The escapees were part of an EPA study on the environmental impacts of increased nutrients reaching aquatic ecosystems. Nutrient pollution is a widespread, costly, and challenging environmental problem for much of the US. When too much nitrogen and phosphorus enter the water, algae can grow so fast that they overwhelm the natural balance of the ecosystem. These significant increases in algae harm water quality, food resources, and habitats, and decrease the oxygen that fish and other aquatic life need to survive. In urban areas, nutrient pollution and excessive algae are often the result of human influences, such as fertilizer runoff. But in small estuaries of the US Pacific Northwest, seasonal blooms of green macroalgae are primarily associated with natural nutrient input, such as from ocean upwelling.

This gave EPA researchers the perfect environment to study the effects of macroalgal blooms on an ecosystem, without the additional influence of toxic chemical co-contaminants that are often present in more populated areas. In the Pacific Northwest, bivalve mollusks (e.g., clams, oysters, mussels, scallops) are an important part of the local economy. The heart cockle, or Clinocardium nuttallii, is one of the most sought after bivalve species by the regional fisheries. In an EPA study published in 2017, researchers looked at the relationship between the heart cockles in Yaquina Bay, Oregon, and naturally driven blooms of macroalgae.

But relocating from under a macroalgae layer comes with a price. The researchers showed that this emergence from the sediment increased the cockles’ risk of mortality from elevated air temperatures and predation.

Some quantities of green macroalgae are necessary for benthic invertebrate communities: it provides habitat for some motile species, a food source for others, and may serve to reduce desiccation by reducing evaporation of surficial sediments. But too much green macroalgae, as produced by elevated nutrients in coastal waters, can be deadly as shown in this study. Parsing out the direct and indirect effects of nutrient pollution and co-contaminants in the ecosystem is an important part of protecting it. Because of the unique setting of this study, the results will help establish a baseline for understanding the effects of nutrient pollution on important fishery species, like the heart cockle.

See the cockle 'jumping' behavior in the video below:

Footage of cockle ‘jumping’ behavior in response to the simulated pressure from a thick macroalgae mat - captured by the researchers during a preliminary laboratory experiment.