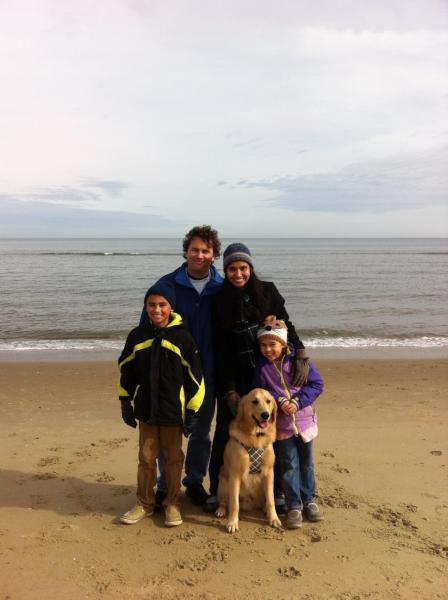 EPA biologist John Cowden and his family at the beach

Science is the foundation of EPA’s mission. We provide scientific data and analyses supporting public policies that protect human health and the environment. At the National Center for Computational Toxicology, we are developing predictive models using toxicological and biological data to anticipate potential effects of chemicals. These computational models are often the only option for estimating the effects of chemicals with little or no available data.

In my role as Matrix Interface, I get to interact with scientists from various disciplines. It’s a lot of fun to talk science and policy, as well as learn about ongoing research projects across the Agency. In addition, I am the Assistant Administrator for Hawaiian Shirt Fridays. I encourage the Aloha spirit by wearing Hawaiian attire on Fridays in the tourist season (Memorial Day to Labor Day).

I have been interested in science since elementary school, but I was really hooked at a summer research program during high school. I still remember the DNA extraction lab and learning about genetic control of cell fate. It was at that point that I decided to pursue scientific research in developmental biology and genetics.

On the educational side, I have a Bachelor of Science in biology, with a minor in chemistry. I have a PhD in molecular and cell biology. My scientific training is in developmental biology, with an emphasis on regulation of gene expression and embryonic patterning.

A scientific career is about exploration and discovery. It's an opportunity to ask questions, design experiments, review data, and gain a greater understanding of how the world works. You’re constantly learning and developing new skillsets. There is intellectual freedom, but you’ll often have to convince someone your work is meaningful. Therefore, being able to communicate your work, to both scientific and general audiences, is just as important as experimental design and data interpretation.

If you can have any superpower, what would you choose?

The power to heal injured and sick people.

Just one? That’s tough. I would say Spemann and Mangold’s “organizer” experiment. Using embryological techniques, they identified a small region of tissue responsible for embryonic patterning. I keep a copy of their 1924 manuscript on my desk. Mendel’s pea plant and Morgan’s fruit fly genetics are equally cool as well.