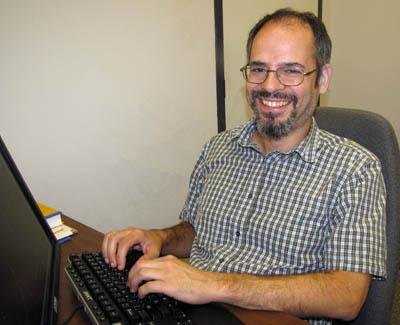 EPA biologist, Mitch Kostich, Ph.D., conducts research to identify risks from exposures to chemical contaminants in water. His research uses technologies from the fields of molecular biology, genomics, analytical chemistry, environmental modeling, and machine learning to prioritize contaminants in the environment based on the potential risks they pose to humans and aquatic life. In his spare time, Dr. Kostich brews ale, tends to his garden, and fishes with a straight hook.

Water is the source of life and that’s why we have to ensure it’s safe for both humans and aquatic life. Our challenge as scientists is determining what contaminants are actually in our water. The possibilities are enormous so we’re studying the problem using many approaches.

In addition to the tests on fish, we’re developing computer models to look at a larger number of contaminants simultaneously. These methods will help us understand what’s in our water and if it is safe.

If you could have dinner with any scientist, past or present, who would you choose and what would you ask them?

I’d pick Ilya Prigogine. He did a lot of work on self-organizing systems. There was a lot of controversy surrounding his work having to do with physical determinism, which is the idea that everything is predictable based on what has happened in the past. He had a major falling out with the scientific community but his work is still well respected.

I’d ask him his thoughts on how self-organizing systems, which are so common in nature, come into being and persist for awhile and inevitably disappear.

In general terms, what I like about my research is getting to pursue scientific questions that have practical importance to human welfare. That's a lot of fun. My lab at EPA has a great teamwork atmosphere and I really enjoy working with others to solve problems.

I graduated from Johns Hopkins University with a Bachelors degree in Biology. After that, I took a detour from education and got a job working in Computer Science and Data Communications. About four years later, I went back to Johns Hopkins and got my Ph.D. in Biology. I didn’t realize it at the time, but my years of computer training have been really helpful when working with the mountains of data I analyze as a scientist.

After I got my Ph.D., I worked in the pharmaceutical industry for about six years. My initial intent was to do cancer research. At the time, the industry was swamped with people like me and I had heard about the EPA's need for people with a background in the genomics area. It seemed like a place where I could make a difference.

When I was about four years old and living in Chicago, my family had neighbors who were scientists. They were friends with my parents and they took me to the cancer research lab where they worked. They spent time showing me around and explaining what they were doing in a way that I could understand it, to some degree, as a four year-old. It was really cool and probably my biggest scientific influence early on.

It can be hard, but it's definitely worth it if you love the subject matter and can't imagine doing anything else! If you decide it's something you really love, it's fundamental to be comfortable working with computers and have a basic understanding of statistics. You don't have to be an expert, but getting some background in those areas is important for scientists and the sooner you get it, the better.