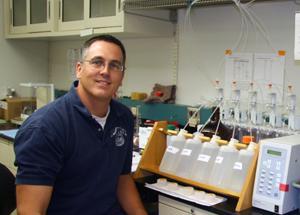 Dr. Mark Strynar is a Physical Scientist in EPA's Office of Research and Development. His research interests include developing methods to measure and analyze the movement and fate of perfluorinated compounds (PFCs) and other xenobiotic compounds (chemicals found in organisms that are not normally expected to be present) in biological and environmental media.

When not at work, he enjoys spending time with his family and volunteering at his local church and various community programs. He is also an avid hunter, woodworker and welder who spends countless hours in his workshop creating furniture, contraptions, sawdust, and metal filings.

For the past eight years or so, I've focused on perfluorinated compounds (PFCs). PFCs are chemical compounds used to make products resistant to stains, water, or heat. Most people would recognize them as the compounds that keep food from sticking to pans or stains from ruining carpet.

Unfortunately, the same properties that make PFCs useful in kitchenware and fabric also make them highly resistant to degradation, which means they stay in our environment for a long time after we are done using them. We have found that PFCs are also widely dispersed in human beings.

My job is trying to figure out the different ways that PFCs get into your body. Each avenue of exposure: water, fish, air, food, house dust, etc., requires a different way ("analytical method") for us to measure for PFCs and other chemicals of interest.

My research supports human risk assessment studies. It matters because if PFC exposure levels are too high we can help people take action. For example, in Decatur, Alabama, we found that levels of PFCs were too high in water and we were able to put people on alternate sources of drinking water. I can see an immediate impact from the work I'm doing to protect people's health.

If you could have dinner with any scientist, past or present, who would it be and what would you like to ask them about?

I would say Louis Pasteur, who was one of the first to do a lot of microbial work and discover that the root causes of many diseases are biologically based in microrganisms. I would like to ask him what made him begin to suspect that microbes are the root cause of diseases.

When did you first know you wanted to pursue science as a career?

I started college studying finance but it wasn't until my second semester sophomore year that I officially chose a major. I realized that I couldn't sit behind a desk for the rest of my life crunching numbers on spreadsheets.

I had always been an outdoorsman and interested in the environment. I decided to find a way to incorporate that into my career. I should probably mention that at the time, we used to register for classes by standing in a line. There was a very short line for the Natural Resource Sciences so that was a nice bonus!

I received my Bachelors of Science degree from the University of Rhode Island where I studied Natural Resource Sciences with a focus in Soil Science. I went to Texas A&M University for my Masters Degree and The Pennsylvania State University for my Ph.D., which were both in soil science. My dissertation was on figuring out how xenobiotic compounds, manmade chemicals, interact with humic material in soil.

I got started here as a post-doctoral fellow in 2002. At the time, most of the national labs had openings for four-year appointments. I came in under that program and it turned into a permanent position. 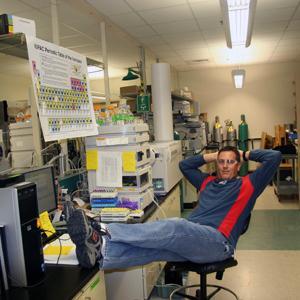 Dr. Strynar taking a quick break from work to kick back for a photo.

Every day is different. Here at EPA, we have a mission statement that is something you can get behind and fully embrace. I can't say many of my friends work for a company with the goal of protecting human lives and the environment. It's pretty lofty.

I would likely be an inventor. Minus the heavy mathematics, I have an engineering and inventing type mind. If I wasn't doing that, I would be a custom woodworker. That is my hobby, which I really enjoy and I'm pretty good at it.

Do an internship. As an undergraduate, I did an unpaid internship with the United States Department of Agriculture. An internship shows you what kind of work a person does on a daily basis and helps you see if that's something you're interested in doing. Most companies and organizations are willing to take anyone on who will work for free. A student can find out if it's something they want to do for the rest of his or her life. That knowledge is invaluable.