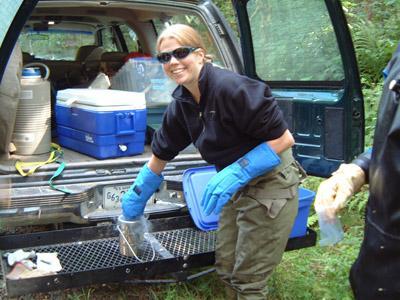 EPA ecologist Jana Compton at work in the field.

As an ecologist with the Pacific Ecological Systems Division of EPA’s Office of Research and Development, Dr. Jana Compton investigates the sources and effects of nitrogen pollution. She obtained her undergraduate degree in biology and chemistry at Earlham College, earned her graduate degrees in forest ecosystems and biogeochemistry at the University of Washington, and then completed her post-doc work at Harvard Forest. Before joining EPA, Dr. Compton worked as an Assistant Professor of Soil Biogeochemistry at the University of Rhode Island.

I work on identifying the sources of nitrogen pollution. Small quantities of nitrogen are essential for living things, but too much nitrogen is harmful to ecosystems. My research focuses on non-point sources of nitrogen pollution, for example, land use and agriculture. I connect these sources to their impacts, and quantify them in ways that people can understand.  This helps to address major problems like air quality, and problems we see in water ways such as eutrophication and coastal hypoxia.

Also, by looking at the social and economical impacts of nitrogen pollution, we can help people to recognize how it might be affecting the benefits we all get from healthy ecosystems, what we call “ecosystem services,” such as clean air and safe drinking water.

If you could have dinner with any female scientist, past or present, who would it be and what would you want to ask them?

I’d like to talk to Ellen Swallow Richards! Ellen Swallow Richards was a pioneer in many areas of science and public health including water safety and treatment, air and water quality, ecology, food safety and even school lunch.  Her research in the field of water studies led to the country's first water quality standards and first modern sewage treatment plant. She is also responsible for developing the Normal Chlorine Map, the first map of water pollution in the United States (below). While teaching marine biology on Cape Cod, she co-founded what was later to become the Woods Hole Marine Biological Laboratory. She began the first public school lunch program through which all the high school students in Boston were fed. Ellen wrote a dozen books and co-authored several others. She was MIT's first woman student, its first woman graduate, and its first woman faculty member.  Although she was the only woman to teach at MIT during her lifetime and was not allowed to receive a doctorate, she taught at MIT for most of her career and opened doors for many other women.

I knew I wanted to be a scientist in college when I had the chance to work in a research environment. I worked at Oak Ridge National Lab for a summer and saw what scientists there did and the way they asked interesting questions and then worked to answer them. The experience really pointed me in that direction. 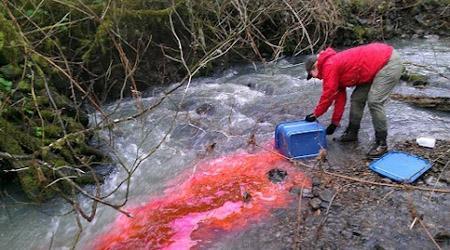 Jana is adding a small amount of a nitrate and a red dye (rhodamine) solution that will be tracked downstream in order to measure nitrogen removal by small intermittent and perennial streams in western Oregon.

My background starts with growing up in Oak Ridge, Tennessee, one of the places where they worked on the Manhattan Project developing an atomic bomb in the 1940s. Growing up in that environment, it’s hard not to think about the mostly invisible chemicals and how they affect you. From radiation to the coal-fired power plant that I could see from my house, those were things that I thought about as a kid while I caught crawdads in our backyard creek.

I think those kinds of things set me on the path to be an environmental scientist. I went to Earlham College for my undergraduate study. There was a great combination of ecology and one of my inspirations was a chemistry professor, Wil Stratton. I learned about acid rain from him. That was the first thing that really pushed me toward environmental science, and I still work on related issues here at EPA. I got my graduate degrees, both my masters and my PhD, at the University of Washington in forest and forest ecosystems. Then I worked at Harvard University as a post-doc. All of those were great experiences and kept me moving toward the kinds of things that I am doing now.

I like getting to work with people who are also really excited about what they are doing. I have a lot of great colleagues who are interested in nutrients and chemistry and all kinds of exciting topics so it's a great research environment.

This is a hard question! I just went in to my daughter’s classroom and taught a bunch of 3rd graders about geology and geologic time. That was really fun to do. It would be hard work to be a teacher, but maybe that would be something I could do instead of science.

I think the 95% perspiration and 5% inspiration rule applies here! You need to love what you do because it will require a lot of hard work.