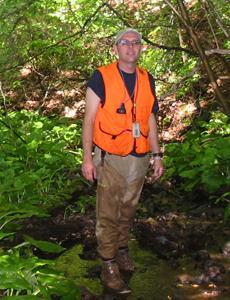 EPA Ecologist Paul Mayer, Ph.D., out in the field.

EPA ecologist Paul Mayer, Ph.D. works in EPA's Pacific Ecological Systems Division where he studies riparian zones (the area along rivers and streams where the habitats are influenced by both the land and water) and stream restoration. Dr. Mayer has also worked as a biologist for the U.S. Fish and Wildlife Service.

My research examines ecosystem restoration projects—looking at how such efforts also restore various kinds of "ecosystem functions," such as nutrient processing, maintaining biodiversity, and erosion prevention. More specifically, my colleagues and I have been looking at stream restoration in urban and agricultural ecosystems where various approaches are employed to reconstruct or redesign stream channels that have been heavily impacted by urbanization, agricultural practices, or past land use.

With stream restoration, we're looking at nutrient uptake, especially nitrogen. Excess nitrogen is one of the ecological stressors that EPA is most interested in because it can cause human health and ecological problems. High levels of nitrate nitrogen in drinking water prevent your body from taking in oxygen efficiently and too much nitrogen in lakes, streams, and estuaries can cause eutrophication and fish kills. My work is helping us learn how to "supercharge ecosystems" and enhance their ability to process excess nitrogen.

If you could have dinner with any scientist, past or present, who would it be and what would you like to ask them about?

While he was not a scientist, I’d like to chat with Teddy Roosevelt who, because of his philosophy of conservation and preservation, was instrumental in establishing the first national parks.  These were pretty radical ideas at the time, yet our park system is now a source of national pride.  I’d like to hear from Teddy how he had such foresight.  It seems we need similar vision and political will to address national and global conservation issues.

I knew I wanted to be a scientist when I was five years-old. My earliest memory is standing in the front yard of my house with my mom and being fascinated by all the birds flying around us. I asked her what kind of birds they were. I knew then, even though I didn't yet know what a scientist was, that I wanted to know more about the world around me.

I received a B.S. in Zoology from North Dakota State University in Fargo. As an undergraduate, I was involved in a study of raptors in western North Dakota, which was the adventure of a lifetime. Over three years, we camped in the badlands of western North Dakota, hiked many miles in search of eagles and falcons, and did a lot of rappelling down cliffs to characterize their nests and, in some cases, build new ones for them.

I received an M.S. in Wildlife Biology from the University of Missouri-Columbia where I studied the nesting behavior of an endangered bird called the piping plover. I continued studying endangered birds when I worked for the Fish and Wildlife Service. Later, I earned Ph.D. in Conservation Biology from the University of Minnesota-Twin Cities where my work focused on using chemical and biological indicators to assess recovery in restored prairie pothole wetlands.  I started work with EPA as a post-doc as soon as I turned in my graduate thesis. 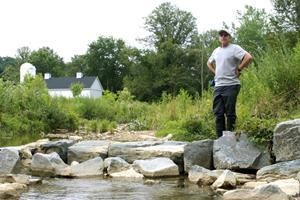 Dr. Mayer standing next to Minebank Run, a restored stream in Baltimore, MD and the site of long-term research on nitrogen cycling.

I got my start as a postdoctoral fellow. I came directly from the University of Minnesota to Ada, Oklahoma, where I worked at the Groundwater Characterization and Remediation Division doing research on nutrient cycling in terrestrial ecosystems and then eventually, I transitioned to work in aquatic systems and stream restoration.  After 14 years there, I relocated to Corvallis, Oregon, where I was the Chief of the Ecological Effects Branch until the ORD reorganization in 2019.  Altogether, I’ve been with EPA for 21 years.

I like working with talented researchers and students to do these large-scale field studies. We collaborate with cities, state agencies, and other resource management agencies that have the capacity, interest and desire to restore a stream. For example, our stream restoration project started in Baltimore where Baltimore County already had a stream restoration project underway. We used that as an opportunity to measure the condition of the stream before and after the restoration.

I’d be teaching and mentoring undergrads interested in the environment.   Young people are faced with overwhelming environmental challenges and there is much information and misinformation about causes, effects, and potential solutions to issues related to climate, pollutants, energy, food production, urbanization, etc.  I’d like to contribute to the education and understanding of the students who are faced with these challenges.

Find a mentor. My mentors helped me realize science was something I wanted to do for the rest of my life. A mentor can help you navigate the maze of unexpected challenges you'll face because he or she has been in the same situation. I feel like I've been helped by a lot of people along the way and I try to do the same for the students whom I mentor now.  My daughter is an undergrad pursuing a career in sciences and I like to think that I can now be a mentor for her.