EPA research chemist, Angela Batt, Ph.D., works in EPA’s National Exposure Research Laboratory where she identifies contaminants of emerging concern in source and drinking water. When she is not researching how to keep our waters clean, Angela loves cooking—especially gluten-free foods! 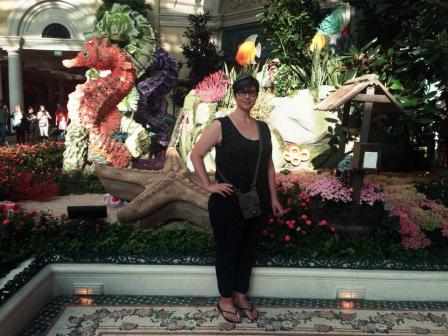 I grew up on a dairy farm in Western New York. I received my Ph.D. from the University of Buffalo. After that, I started at EPA doing my postdoc and then I was hired here full time.

Most of the work that I’ve done at EPA has been with water quality, especially looking at contaminants in water or in food. I think that providing clean water is one the biggest and most important challenges that we have in environmental science right now.

I like that I get to do important work that matters. In my field of analytical chemistry, we take a pretty big pay cut to work for the government, but I feel that it’s worth it to have a job with a focus on public service and an opportunity to make a difference for the environment.

If I had to pick a scientist, it would be Dian Fossey. I was 11 when the movie Gorillas in the Mist came out, and I was obsessed. Since I grew up on a farm and loved science, I became interested in her work of studying, protecting, and saving animal species. That’s what made me want to be a zookeeper!

I think I would either be a nutritionist or I would own a restaurant.  I have some health issues that can only be solved with a gluten-free diet, so I would help other people with their diet or open up a gluten-free restaurant and bakery.

I totally would want to be invisible. I could stalk people and eavesdrop without them knowing! That’s such an easy question.

One of the most important things to realize is that there is a big push to make science interdisciplinary. When I started grad school it was “you’re going to be a chemist, you’re going to know about chemistry,” but once you go into an agency like EPA, you realize that real world problems can’t solve themselves with one discipline. It takes the integration of a lot of different scientists. You should have a good background in a lot of other sciences and math, especially statistics. You should also be able to communicate your work to other scientists, in layman’s terms. A lot of the time we become too specialized and lose the ability to communicate the work that we are doing.

Since I have been working in the area of pharmaceuticals, I am going to say the discovery of penicillin. It totally changed the way medicine worked, and it was just one of those natural observations. A very small observation that completely changed the way you can treat people with antibiotics.

I think the biggest scientific problem that we are going to face is having clean water. The bigger challenge will probably be getting people to really care about environmental issues and getting them to make changes in their daily lives that will help save the environment.

This is kind of a cheater response, but it is actually my colleague Mitch Kostich.  I am an analytical chemist and he is a bioinformatician. Analytical chemists measure stuff in the environment that is bad for you, but we don’t always have the biological context to put meaning to those measurements. Working with Mitch has made me see the bigger picture of what we do.