Vasu Kilaru studied optics and astrophysics as an undergraduate at the University of Rochester and attended graduate school at Duke University for resource economics and policy. At EPA, Kilaru works to safeguard the public’s health from the negative effects of air pollution. 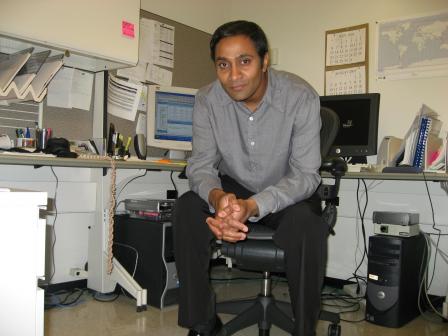 EPA Research Physical Scientist Vasu Kilaru When did you first know that you wanted to be a scientist?

I always liked science, physics, and math. I remember when I saw the Apollo 15 mission on TV, I wanted to be an astronaut for a while and then my dream changed from astronaut to astrophysics.

Ultimately it is about protecting public health and the environment. The science that helps us understand the nature, movement, and sources of air pollution in the environment and atmosphere is the same science that enables us to better monitor and ultimately control exposure to that air pollution. We work to protect people from air pollution’s harmful effects by controlling it from the source, informing people what they might be exposed to, and communicating how they might reduce their exposures.

I like how stimulating it is. New technologies enable new types of science, and in turn, science enables new technologies. It’s fast paced, and it’s exciting to see how capabilities progress over time. We’re trying to use innovative technologies to do some of the things we used to do for air pollution monitoring, but making it smaller, faster, and less costly. For example, using satellite imagery to track smoke plumes from forest fires and monitor who might be impacted. I find it amazing that you can watch things happen from space. When the fires are big enough, you can see the smoke trails for hundreds of miles as they propagate through the atmosphere. Since you can see all the way down to the ground with satellites, you can actually see the trail of smoke coming from the forest fires. They are actual images of the earth and the smoke we’re looking at! 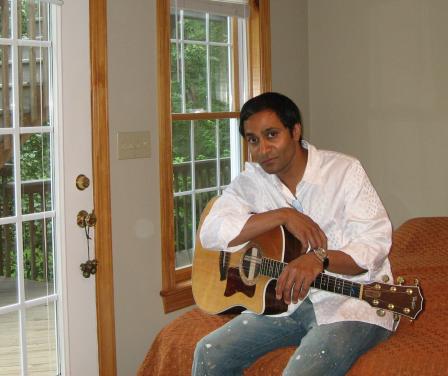 Vasu likes to relax at home by playing his guitarIf you weren’t a scientist, what would you be doing?

What advice would you give students who are interested in a career in science?

I would certainly encourage them. It’s a great career, and it’s very satisfying. Given the big data era that we’re in, a career in applied mathematics or data science would be great because you can work in many different industries and you can work on a lot of cool projects. Science is a big field. There’s so much happening in terms of technology, whether you’re talking physics or biology. And quite often, science raises more questions than answers, so be prepared.

What do you think the coolest scientific discovery is, and why?

I think the invention of the microchips that led to the development of the modern day computer is probably the biggest and most influential technology in all our lives. These microchips permeate everything: your car, your television, your computer, your phone. Pretty much everything has a computer chip in it—even your toaster and your blender probably have little computer chips in them!

I think it comes back to data use. I think a big challenge now is that we can collect a lot more data than we are able to analyze. We are going to have to develop new intelligence to help us sort through that. That’s going to be a big step in the next 100 years.

I think we will see the development of robots and artificial intelligence progress to the point that we will interact with things that are not human in an almost human-like fashion. I think we’ll be on the cusp of that in the next 100 years. You’ll be on the phone and getting those automated messages, but you won’t exactly know if it’s an artificial intelligence or another person on the other line.

That’s a tough one. I would have to say time travel. You could do so much with it! Barring that, I think invisibility would be cool. If you are invisible, you can actually get a truer sense of how your subject behaves in a scientific way. You could observe something and not have the observer affect the subject.

If you were stranded on a desert island, what three things would you bring?

In your scientific field, whose work are you most impressed by?

Although the field of behavioral economics isn’t exactly my field, the kind of work by people like Dan Ariely at Duke and Daniel Kahneman, a Nobel laureate economist, impresses me immensely.

I am trying to bring some of the principles that they’ve focused on into the work that I do at EPA. I want to implement some behavioral economics principals into our thinking