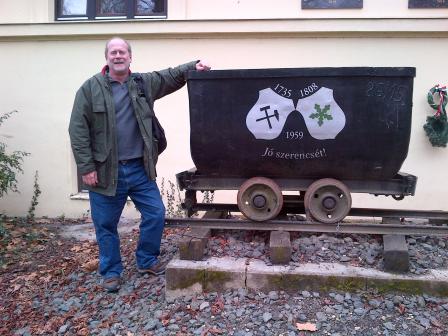 Dr. Gillespie at the Faculty of Forestry, University of Sopron, Hungary. The Faculty is one of the oldest forestry schools in the world, founded in 1808, and has roots in mining that go back to 1735. In 2015, Dr. Gillespie spent a month there as a State Department Embassy Science Fellow, teaching climate change and forestry. EPA’s Andy Gillespie is a forester and statistician by training.  He spent the first half of his federal career with the US Forest Service, eventually as the leader of the Nation’s forest census program. He came to EPA in 2004 and is currently helping to lead and execute research on per- and polyfluoroalkyl substances.

At the moment, my primary area of science is helping to lead and execute research on per- and polyfluoroalkyl substances (PFAS). This matters to a wide array of stakeholders who are concerned about potentially widespread threats to human health and ecosystems from these chemicals. Ultimately this science is used to understand where the highest risk is, and to prioritize action to mitigate that risk. Since we can’t take on every problem everywhere all at once, efficient and effective prioritization is crucial to maximizing our return to society for the investment that society makes in supporting us.

I started as a forester, then gravitated towards applied statistics (biometrics) in graduate school. I did a post doc in the early stages of the Department of Energy’s climate change program, working to quantify the CO2 contribution to the global carbon cycle associated with tropical deforestation.  I joined the US Forest Service as a research biometrician and ended up working on the US national forest inventory and monitoring program (the Nation’s Forest Census), eventually rising to lead that program. In 2004 I graduated from EPA’s Senior Executive Service (SES) Candidate Development Program and accepted an SES position with EPA, where I have since learned about toxicology, risk assessment, exposure science, environmental engineering, atmospheric modeling, and now PFAS.  Along the way I picked up Spanish sufficiently well enough to work in that language, and a smattering of other languages through various international assignments.

In my current role, what I like the most is working across the entire spectrum of risk assessment/risk management science, as well as working with regulatory/policy makers and managers who use the science to protect human health and the environment.  It is the most holistic science position I have ever held, engaged in doing the science as well as transferring and applying it to make the world a better place.  Some of the best minds in EPA are working on PFAS as a priority, it is great to be part of such a high-performing team.

If you could have dinner with any scientist, past or present, who would it be and what would you like to ask him or her?

I would like to have dinner with Charles Darwin and ask him about some of the backstories behind his work on biology and evolution. His writings On the Origin of Species and The Descent of Man incorporate many stories to communicate his ideas and thinking. I would like to hear about some of the passages and stories that got left on the editing floor, the ‘unsuccessful species’ in the evolution of his thinking and writing.

As long as I can remember I have been interested in science and discovery, and in the application of science to make the world a better place. I grew up in New Jersey in the 1960’s, not far from Menlo Park, so Thomas Edison figured heavily in elementary school education and became an early role model. I was and am still a heavy consumer of science fiction, including the classics by Jules Verne and H. G. Wells. I always pursued science in the sense of reading across fields and disciplines, but I did not really think of science as a possible career until I was finishing my BS degree and thinking about job hunting.  That was really the first time that I could see how one could have a career doing science, as opposed to using science.

I think of ‘being a scientist’ as more about my philosophical outlook than my profession, i.e. as being someone who likes to ask questions and tries to find novel answers and new, hopefully better ways of doing things and of seeing the world. If I was not a scientist, if I did not have that curiosity, I would probably still be interested in some other technically complex field like finance or law, a field where complexity could be understood and applied in creative ways to achieve some useful goal.

Transmutation – the power to take a common, even nuisance substance – say excess CO2 – and transform it into something rare and precious – say, Tripel Karmeliet Belgian Abbey ale. Challenging environmental problems such as PFAS destruction/disposal could be readily solved if we could rearrange subatomic moieties to change one substance into another. And a nice beer at the end of the day, created via carbon sequestration, would be an added bonus.

You’re stranded on a desert island; how would you use science to survive?

Read as much and as widely as you can, across disciplines, collecting and storing new ideas to put together in your own way. Learn a second or third language to help increase your awareness of how other people think and view the world.  Don’t be intimidated; science is just an organized body of knowledge, you can have a fun and interesting career by either adding to the organization or adding to the body.  There are plenty of places to contribute.