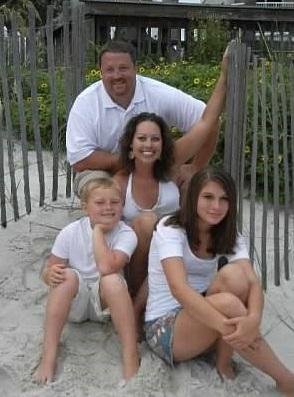 EPA researcher Dawn King (center) and her family at the beach. Research microbiologist Dawn King works in EPA’s National Exposure Research Laboratory where she identifies and assesses the health risk of microbial pathogens in water.  When she is not in the lab, Dawn enjoys spending time on her farm and taking care of her animals – especially her cows!

I received a bachelors in science from Miami University and I previously did an internship with Proctor and Gamble. I was an ORISE intern with EPA and then ended up getting hired here permanently. So I’ve been here since December of 2002.

When I was a sophomore in high school, my science teacher recommended that we go hear a talk by Richard Preston when he came to speak at Miami University. He wrote the book The Hot Zone about Ebola and the outbreaks in Zaire. I was just enthralled! I wanted to cure diseases that kill people in horrible ways.

I hope that it is making water safer, whether it is recreational water or drinking water. I work with mycobacteria and they tend to hurt the most immunocompromised— the oldest, the youngest, and the sickest of the population. It is not something that healthy people are as concerned with, but we need to be worried about the whole population. We need to make sure that everyone is safe.

There aren’t a lot of people who work with mycobacteria so there are still many areas to explore, avenues to go down, and work to be done. My lab is in the process of testing the qPCR methods that we have developed and hoping to make it an official EPA method. Most samples that my lab tests come directly from drinking water plants, hospitals, and water reuse centers. So we are looking at real world exposures to pathogens.

I would want to have dinner with Leonardo Da Vinci. I can’t think of anyone in history who used every facet of their brain the way he did. Typically, someone is interested in science and math or art and creativity, but he did everything… everything exceptionally well! Being that gifted in every aspect is just inspiring. He was an inventor, an engineer, a scientist, but also a sculptor and a painter. I can’t think of anyone in history who had all those attributes! It is amazing. He dabbled in everything, even archaeology. I would ask him what his motivation was for dabbling in so many different fields.

I love being outside, I live on a farm, and I love animals—I would probably be a veterinarian!  I love all different kinds of animals, both farm and domestic. However, I tend to lean more towards livestock because I live on a farm.

The ability to remember everything. In science you are always trying to rack your brain for facts and statistics that you have read in manuscripts—what paper did I read that in again? It would make my job much easier.

Don’t get discouraged about the coursework! Typically science it is on the difficult side and more time consuming than other majors. I know a lot of people who have dropped their science majors because of this. They had friends in other fields and thought their workload was easier and more appealing. Just stick it out. In the end, if it is something you really want to do then you need to work for it – even if it requires more effort.

I would say Alexander Fleming’s discovery of penicillin, the first antibiotic. I think it changed science and probably saved the lives of more people than anything else— anything I can think of. People aren’t dying from just simple infections anymore. It opened a whole world of science and discovery.

I think parents are very obsessed with not letting their kids get dirty. Everything is so clean and sanitary. I’m not saying let your kids play in sewage or anything—but let them go outside, get dirty, and build immunity. Years down the road we’re going to be sick from things that in years past never would have made us ill. We would’ve been exposed at a younger age and built that immunity. By making things too clean and too sterile, we’re not exposed to enough and our immune systems aren’t as robust.

This person in science that has impressed me since I was a child is Bill Nye.  He might not be working in a laboratory collecting data day after day, but I think that he has had a huge influence over generations of fans.  He has helped to make science real and fun and I’m sure has swayed many to explore careers in science.  He definitely opened up my eyes to the possibilities of having a biology degree, and has had an influence on my daughter who decided from a young age that she wanted to be a scientist after watching episodes of his show.  He is a huge proponent for spreading the word about the effects of global warming, and how to protect our planet in the future.

You’re stranded on a desert island with a community of other survivors- what is your job?

Keeping order! That is what I do best— I am the mediator.