Justin Conley is a Reproductive Systems Biologist investigating the developmental and reproductive toxicity of PFAS and other environmental chemicals.  When he is not in the lab, he is busy playing with his two kids and exploring the outdoors. 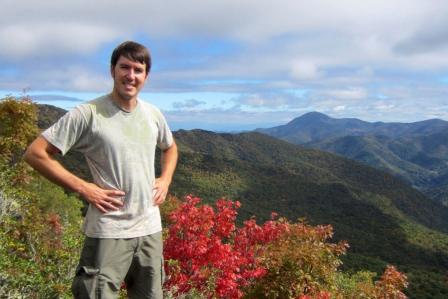 Meet EPA Researcher Justin ConleyTell us about your background.

I grew up in eastern Kentucky on the Ohio River in a fairly industrial part of the state, so I became aware of pollution at a pretty young age. For undergrad I went to a really small college in western North Carolina called Warren Wilson College. I was an environmental science major from the beginning and was formally introduced to environmental toxicology through my undergraduate research advisor, John Brock. After undergrad I worked a bunch of seasonal jobs, like field biology and environmental education, and I travelled for a while. I went back to school and got my M.S. in environmental science at the University of Tennessee at Chattanooga where I studied pharmaceutical residues in river water. From there, I continued on the path of studying chemicals in the environment. I moved to Raleigh and got my Ph.D. in environmental toxicology at NC State studying the movement and toxicity of selenium in aquatic food webs.  After I finished, I came here to EPA as a postdoc where I focused on endocrine disruption and water quality monitoring.  In 2019 I was fortunate to be hired into a principal investigator position in ORD studying the effects of reproductive and developmental toxicants using in vitro and in vivo approaches.

I was always interested in the natural world as a kid, but I took more classes in art than in science. When it came time to go to college though, I knew I wanted to do something applied. I liked being outside so I thought I might like studying environmental science.  That led me to Warren Wilson College, which had a highly rated undergraduate environmental science program.  I had a good introduction to research there and that started me on the path I’m on now. I liked how conducting research was technical and difficult but rewarding to see a project through to completion.  I also recognized this as a way to address and contribute towards solving real-world problems.

The group I work with here at EPA does a really good job of doing research that translates well to the risk assessment side of regulatory agencies. Our work characterizes the adverse effects of exposure to chemicals and mixtures along with their dose response relationships. This research can be used—not only by EPA, but also other regulatory agencies across the U.S., Europe, and other parts of the world—to help determine if a chemical needs to be regulated or should or shouldn’t be used in, for example, consumer products or agricultural settings.

I like that we produce results that can help determine how chemicals are regulated and used.  I believe our efforts have a positive effect on environmental and human health.

If you could have dinner with any scientist, past or present, who would it be?  What would you ask him or her?

I would probably be brewing beer. Before starting a family and having two kids, I used to do a lot of brewing as a hobby so maybe I would be running a brewpub and brewing craft beers. I love the process and have always thought it could be a fun alternative that is still inherently scientific.  Either that or something outdoors. I like to spend a lot of time outside. I’ve had seasonal jobs in the past where I’ve taken people on hiking and backpacking trips, so some sort of guide outside where I can take people around and show them pretty places would be fun.

I would probably be brewing beer. I do a lot of brewing as a hobby so maybe I would be running a brewpub and brewing craft beers. I love the process and have always thought it could be a fun alternative that is still science related.  Either that or something outdoors. I like to spend a lot of time outside. I’ve had seasonal jobs in the past where I’ve taken people on hiking and backpacking trips, so some sort of guide outside where I can take people around and show them pretty places would be fun.

The first thing that comes to mind would be flying. I would love to be able to just take off—and it certainly would make my commute to work much easier.

I think that as you work towards being a professional scientist, you spend quite a lot of time writing and speaking. Early on in your training, try and make a dedicated effort to get public speaking experience, get comfortable with presenting, and learn how to write well. How well you are able to put your ideas out there, present them, and put them into context can have a large impact on your career.

There are many people who do very good work, but I would acknowledge Lou Guillette.  He had a personal impact on me during my undergraduate research and he produced a very extensive and strong body of research related to reproductive toxicology and physiology.  He studied alligators primarily, but he was a really great scientist in terms of relating human and ecological health.  He was highly regarded, and I learned a lot from interacting with him and reading his body of work.

I am the one who makes all the beer! Either that, or I like building things and I do pretty well with tools, so maybe I’m the one who builds the hut.