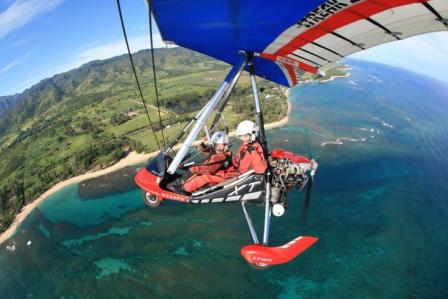 EPA Researcher Kristen Rappazzo flying over northern Oahu in an ultralight  aircraft. What kind of research do you do at EPA?

My exposure of interest is usually air pollution, but I have also examined associations with pesticides and environmental quality and performed reviews on chemicals that affect reproductive function from puberty to menopause.

I was also part of the team that developed the Smoke Sense mobile app, a citizen science project that shows users where smoke events are occurring, gives them advice about what they can do to protect themselves if they are exposed, and lets them volunteer anonymously to participate in the study by providing information about their smoke-related health symptoms and feedback on the advice they are given. The more we know the better our advice is, so I encourage everyone to go to their app store and download!

What is your background?

I have a bachelor’s degree in brain and cognitive science from the University of Rochester. After that I worked as a technician in an environmental toxicology laboratory for a couple of years, then got my Master of Public Health in environmental and occupational health from Drexel University. From there I came down to North Carolina as an EPA fellow. After my fellowship was up, I went to University of North Carolina at Chapel Hill for my Ph.D. in Epidemiology, and then back to EPA as a post-doctoral fellow where I was later hired to a permanent epidemiologist position.

I genuinely have no idea! I often say that getting rejected from medical school was the best thing that ever happened to me because it led me to public health and epidemiology, which I love. I’ll have to go with a Pride and Prejudice quote here, “It has been coming on so gradually, that I hardly know when it began.”

I like doing the coding and analysis best. It is fun to figure out how things work and fit together in the best way, though it’s often challenging. I also like working with a lot of smart, passionate people who care about the environment and health. 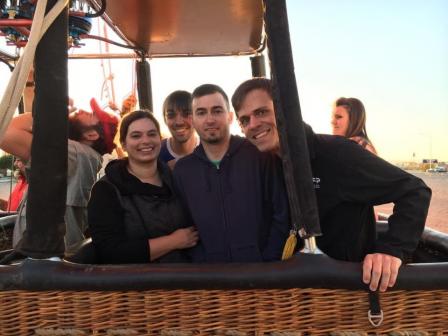 Rappazzo (left) about to go hot air ballooning over Las Vegas.How does your science matter?

My work helps people and governments make the best decisions they can about the world around them. My individual pieces are usually a small part of a larger whole, but it all goes into protecting public health.

International art thief!  More realistically, and assuming my dad hasn’t won the lottery, probably an accountant. I like numbers and I have none of the skills to be a successful thief.

Find people to support you, work on different projects so you can figure out what aspects of science you enjoy, and if you decide to go to graduate school, make sure you have a completely unrelated hobby so you don’t burn yourself out. I did improv comedy.

If you can have any superpower, what would you choose?

If probability manipulation is not an option, I would choose teleportation for convenience, or mind control for villainy. I could probably go on about this topic for a long time, so I’ll stop now.

Vaccines! So simple and yet they save so many lives.

If you could have dinner with any scientist, past or present, who would you choose?

Grace Hopper, a pioneer of computer science, whose work is the foundation for what allows me to do mine. She was a Navy rear admiral and generally all around awesome.