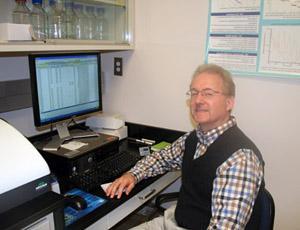 EPA Scientist Dermont Bouchard, Ph.D., is working to better understand how tiny nanomaterials might be released into the environment. What he and his research partners are learning helps regulators and other decision-makers lower risks and better protect human health and the environment.

My research focuses on the fate of nanomaterials in the environment—tiny materials measured on the "nanoscale" that are about 100,000 times smaller than the width of a human hair.

The field of nanomaterials, which is relatively new, uses the unique properties of nanoscale materials to develop new products and technologies, including many used in our homes.

My colleagues and I are developing techniques to measure and model the fundamental processes that determine where these nanomaterials end up in the environment.

One of our roles as scientists is to supply some of the basic information about nanomaterials: their properties, persistence in the environment, and the state of these materials, so that regulators can make informed decisions to protect human health and the environment. We are working to identify which materials would be most likely to be released into the environment so we can focus on them for additional study.

Carel J. van Oss, a Dutch scientist who has made a lot of significant contributions to colloid science. Colloid science is really the foundation for a lot of the nanomaterials work that is done right now.

On top of being such an accomplished scientist, he was also a talented forger. While he was in the Netherlands at the start of WWII, he forged documents that assisted hundred of Jews in escaping Nazi occupation. I would like to ask him how he dealt with the occupation and how he got to where he is today.

All three of my degrees are in Agronomy. I got my Bachelors degree at Arizona State University, and both my Masters degree and Ph.D. from the University of Arkansas in Fayetteville. For my doctoral research, I primarily studied the way that pesticides move in the environment.

How did you get to EPA?

I started my career with a large research consulting laboratory. I was working on a contract with EPA and I met some people who worked here. When a position opened at an EPA lab, I applied and was hired. I was attracted to EPA because of the good research infrastructure, including lab space and good scientific instruments. It was a great opportunity to start a job with that kind of support so I could get my career up and running.

Research always provides new and interesting data that is often difficult to explain. As a scientist I get to draw on my experience and what I've learned throughout my career to try to make some sense of the data and give a plausible explanation of my observations.

A lot of times that's a group effort. Scientists tend to be sort of argumentative people and I love to argue a point, so it's fun to sit down with collaborators and argue and exchange ideas in order to solve the puzzle. It's that sort of collegial argumentative exchange of ideas and explanations that makes it fun to go to work.

I'm part of the Sputnik generation. When I was in elementary school and Sputnik was launched there was a big push nationally to increase science education in the United States. Someone would come once a week to our school with a different sort of expensive scientific apparatus and do different experiments using it. I remember a scientist bringing in a projection microscope and showing us all the different stuff that was in a drop of pond water. It was very simple but I never would have seen it if he hadn't come to our class because of the investment in science education at the time. That was what pushed me over the top.

I never thought of myself as that particularly scientifically minded. However, in my high school yearbook, they chose what career you'd most likely have and mine actually says that I would be most likely to work for EPA. What a funny coincidence!

I think curiosity is important. If you're always thinking about how things work and taking them apart to find out, science would be a good career for you.

It's a great place to start even if you find yourself in another career later like law or computer science. Everyone should have a basic scientific understanding of how the world works. It's part of being a good citizen.