EPA scientist Joachim Pleil is the EPA “breath guy” and was involved with the founding of the International Association of Breath Research (IABR) and the Journal of Breath Research (JBR).  He started off developing methods for measuring volatile organic carcinogens in air, and then progressed to linking chemical biomarkers to absorption, metabolism and elimination by analyzing human blood, breath, and urine. 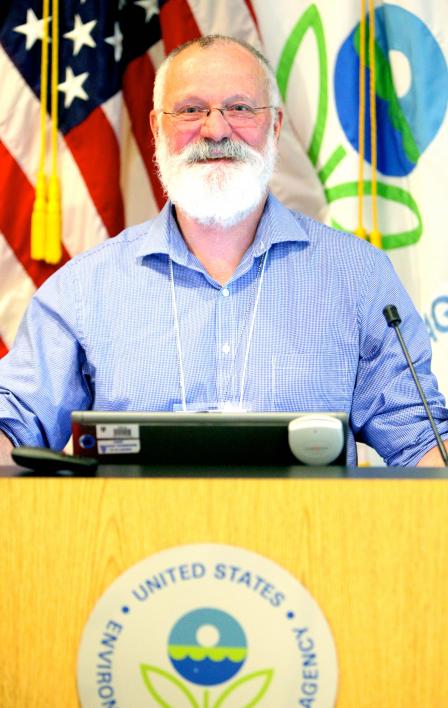 Tell us about your educational background.

I was born in Germany and moved to the United States when I was eight years old.   I graduated from Southern Illinois University with a bachelor's degree in both mathematics and physics and stayed on to get to get a master’s degree in physics with a focus on laser photochemistry. After working for a while, I went back to school and received a Ph.D. in environmental science and engineering at the University of North Carolina, Chapel Hill School of Public Health.  Along the way, I took ad hoc graduate classes in biochemistry, mathematics, and electrical engineering at NC State University in Raleigh.

Well—I’d like to give you some grand prophetic reason for this, but the reality is that my dad was an X-ray physicist. When I was five he was explaining Einstein’s theory of relativity to me.  There was never any question that I was going to follow in his footsteps.   My first semester in college I majored in physics and I never looked back.  Science was always something that I knew I was going to do.

In my 30+ years as an environmental scientist, I’ve been involved in a lot of different aspects of instrumentation-based research including optical laser systems, gas chromatographs, mass spectrometers, and all kinds of environmental sampling gear.  What matters is that all of these projects ended up providing tools that the environmental research community uses to protect public health. Using these tools, they are able to  measure exactly what’s in the environment and can help validate results from computational emission and exposure models.

My contemporary work revolves around identifying and categorizing chemicals in what we call the human exposome, which is the counterpart to the human genome.  The reason that this is important is that ultimately 70% to 90% of all long-term human diseases—cancer, autoimmune, neurodegenerative, cardio-vascular, etc.—are related to environmental factors.  One of my favorite quotes along these lines is:  “The genome loads the gun, but the environment pulls the trigger”.

I’ve also progressed to doing research in blood, breath, and urine. In fact, I am the EPA “breath guy” and was involved with the founding of the International Association of Breath Research and the Journal of Breath Research.   We can now measure everything in breath from gasses to DNA due to some of the methodologies that we’ve developed here at EPA and on the medical side that don’t require poking a hole in someone or making infectious waste by having them pee in jars.

Other important factors in my science efforts are education and outreach. I think that encouraging and nurturing the next generation of environmental scientists is probably what makes my science matter the most.  I currently serve as an adjunct professor at University of North Carolina and teach a class called “Environmental Exposure Assessment.”

My first job was actually as an onsite research contractor for EPA where I designed long-path optical laser systems and photo-acoustic spectroscopy instrumentation for the trace-level detection of organic molecules in air.  After about seven years, I became an EPA federal employee. That’s when I switched research focus to gas chromatography – mass spectrometry research to continue to push the envelope for ultra-trace level measurements both in air, and in human biological samples.  I have been here ever since and will hit my 30th anniversary with the Agency in 2017.

My main reason for having chosen environmental research is that we ultimately protect the public health; knowing that my work contributes to this goal lets me sleep at night.  Working as a researcher at EPA, and I guess for the government in general, has provided me with incredible opportunities to work on interesting projects.  Sure, you can have a great scientific career addressing your own niche in environmental research, but because the government is big, there are all kinds of related topics that come up. Something we work on at EPA for exposure assessment and public health  may have implications for the military, space flight, national security, occupational safety, or medical disease diagnosis. I try to get involved in such tangential projects not only because they are fascinating, but also because I like solving puzzles, and in the long run, I like to demonstrate the value of EPA research beyond our parochial boundaries.

Well, the first thing I tell them is that the chances of getting rich are not great—we can’t all be Bill Gates or Steve Jobs. But the feeling of looking forward to going to work every morning to see a new result or what the next experiment will show is worth it.  As a scientist, it’s all about the curiosity and the “aha” moment where something just clicks.  That’s why you become a scientist; that’s what you have to explore inside yourself when trying to decide on pursuing science as a career.

I suspect that I would be designing the layout of rooms, furniture and mechanical aspects in houses. I have pretty good spatial and visualization abilities. For example, I designed my own house and sometimes just for fun, I review architectural plans. Cooking is another thing that I could probably get a job doing.  At my house I am in charge of the kitchen. My wife always says well you’re a chemist anyway and cooking is in the same lane; also my Mom was a professional chef.

I really think that the next big scientific movement is going to be around the automated self-driving car. This is in my mind the great intersection of public good and high-end technology that is achievable in the next handful of years.  Imagine saying, “Hey car, pick me up in front of my house in ten minutes and take me to the pharmacy,” and then making that trip without ever touching the wheel.  This will change the life of humans especially for those of us who in 10 years or so won’t have good eyesight and may not be allowed to drive. This technology is going to be important for the autonomy of an aging population, not to mention the inebriated.  It will also be a huge improvement on quality of life and safety.  The challenge will be overcoming the political, medical, and technological hurdles.

One guy I would be interested in talking with is Enrico Fermi—a Nobel Prize winner in physics and the developer of the first sustainable nuclear reactors, CP-1 and CP-2.  Fermi used to bring all his graduates students these physics puzzles and they were very clever. You could brute force them to death but if you just thought about it a particular way, then it would be a 30 second aha moment.  My advisor (Bob Zitter) in Physics grad school at SIU was a student of Fermi’s and Bob inflicted some of these puzzles on us in the next generation.

Richard Feynman is another one. He was one of these guys that could take really complicated information and explain it in a way that almost anyone could understand. Here’s an example—after the Challenger disaster at NASA, there was a congressional investigation that really underscored how confusing the event was for people. No one could explain what happened to the shuttle in plain language.  With a clamp, some ice water, and an example O-ring, Feynman cleared up a lot of confusion.