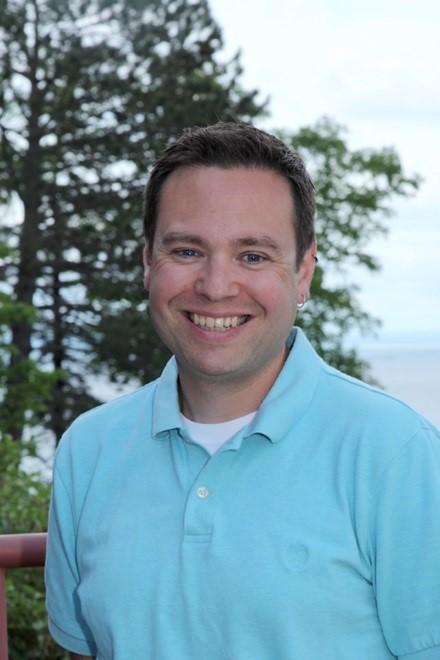 Joel Hoffman is a research biologist interested in how human-caused changes to the environment influence aquatic ecosystem processes, aquatic habitat, and fish population success. One project he is currently working on is remediating and restoring Great Lakes’ habitat to improve the quality of life for the surrounding communities in that region.

I grew up in East Lansing, Michigan, but over the years I ultimately found a home in Minnesota. I earned my undergraduate degree at the University of Michigan in Ann Arbor. While I was there, I completed a dual degree program and simultaneously worked on a BS in Resource Ecology and Management in the School of Natural Resources and a BA in Philosophy in the College of Literature, Science, and the Arts. I finished in 1999 and moved west to Nevada to work on high desert ground. After that, I spent two years in the Pacific Northwest working on fisheries and fish-related science projects everywhere from Oregon to Alaska. Next, I jumped coasts to earn my PhD in Marine Science at the College of William and Mary in Williamsburg, Virginia. I was enrolled in the Virginia Institute of Marine Science, located across the York River from Yorktown, Virginia.  That was a wonderful opportunity to be living in history. Then in 2006, I came up to the Duluth facility at MED (Mid-Continent Ecology Division) for an EPA post-doc. It was late 2009 when I became a federal scientist, and in 2017 when I became Chief of the Ecosystem Services Branch.

I think what we’re doing is improving the quality of life in communities. It goes beyond simply helping. One of our big projects is to develop ecosystem service models for remediation and restoration projects throughout the Great Lakes. The idea is to test how different alternatives for contaminated sediment remediation and aquatic habitat restoration will impact the ecosystem and the services it provides. We are also interested in how the surrounding community will benefit from an improved quality of life, health, and economy as a result. That is, by improving the quality and health of the ecosystem, we can have a profound impact on the well-being of the surrounding community. 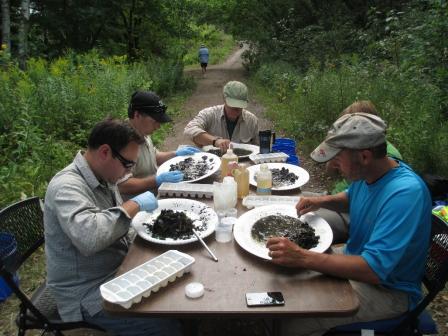 Joel ( foreground left) works with an EPA research team and state partners to sort aquatic invertebrates for contaminant analysis at a remediation site.

If you could have dinner with any scientist, past or present, who would you choose and what would you ask?

I started my training in classical limnology (the study of inland waters), so I would pick George Evelyn Hutchinson, who is often considered the father of modern Ecology. He wrote the well-known book Treatise on Limnology, which was the first-ever Limnology textbook.

The question I would like to ask Hutchinson is how he got the idea of developing aquatic tracers. In my own research, I use different isotopic tracers to follow contaminants, nutrients and energy through food webs. But Hutchinson did it first. He added radiotracers to a whole lake in the late forties. We were just beginning to understand radioactivity! Especially given the technology of the era, I’m amazed that it occurred to him to start applying tracers in order to understand ecosystems. He was decades ahead of his time on that thought!

I first knew that I wanted to be a scientist when I took my first limnology class as an undergraduate. It had never occurred to me that you could spend your career on a boat. I thought, “This is a job?” You come out here, you sample chemistry, you sample fish, and then you go for a swim. What else could you ask for in a job? 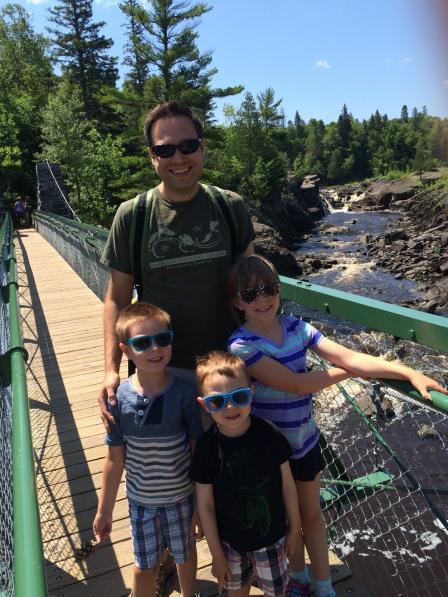 Joel enjoying a walk on the historic swing bridge at Jay Cooke State Park with his three children (left to right: Ethan, Isaac, and Natalie).

What advice would you give students interested in a career in science?

I’m a huge advocate for students to get as much real-work experience as possible. I would say as soon as you can, get out there and learn what professional science is like. Having a career is much different than training. You’ll quickly find that the skill sets you learned in school are useful, but not always a great match. The skill set that you learn on the job will also help you figure out what you want to be doing.

What do you think the coolest scientific discovery is, and why?

Purely from a cool standpoint, I vote for satellite-based remote sensing. I think the fact that I can sit at my computer and download images of the planet in real-time is so cool. And it’s interpretable for scientific purposes, such as figuring out what kind of algae is in the water!

I really admire Brian Fry’s work. Brian Fry was a professor at LSU, but is now at the Australian Rivers Institute. Brian was one of the pioneers in applying isotope tracers to understanding fish and fish food webs. He’s been very creative about how we can use these tracers to track around pollution, assess ecosystem health, and track migration of animals over both short and long distances. He’s inspired a lot of the research I’ve done.

I would choose to fly. That goes back to my fascination with remote sensing. I just think it’s really amazing to see aerial views of the planet. I would have to be able to fly all the way into outer space with my Superman capacity.