Bisphenol A (BPA) is an industrial chemical that has been used to make certain plastics and resins since the 1960s. In recent years, science has shown that exposure to BPA and its alternatives can result in possible human health effects. Adverse effects on neurodevelopment, behavior, metabolism, and the immune and cardiovascular systems have been found in human and animal models. As a result, regulators and researchers are interested in learning more about bisphenol chemicals.

This image shows a microbe-free zebrafish colonized with fluorescent bacteria that prefer to colonize the host zebrafish intestinal tract (bacteria are shown in red). Normally, a diverse array of microbes colonize the zebrafish. This study shows that microbial communities can be massively disrupted by exposure to widespread environmental contaminants like BPA. Image credit: Tamara Tal.New research by EPA scientists used zebrafish to examine the effect of several BPA alternatives on two important developmental health indicators—developmental toxicity and microbiota disruption. Developmental toxicity is the study of adverse effects on the development of the organism resulting from exposure to toxic agents. Microbiota are dynamic communities of bacteria, viruses, fungi, archaea, and protozoa that colonize the skin and gut of a host animal (including humans) and play important roles in health and disease. Research has found that these microbial communities help regulate many diverse and complex biological processes including brain development and behavior, lipid metabolism, and immune responses. 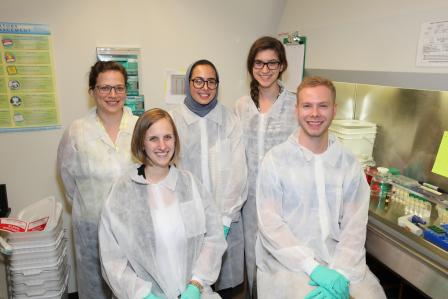 These results illustrate a somewhat paradoxical observation that chemicals which cause potent host toxicity are less likely to kill or repress the growth of the microbial communities in the zebrafish. Alternatively, environmental chemicals that are less toxic to the host, meaning zebrafish can tolerate higher concentrations of the chemical, seem to be more likely to affect the types of microbes that can colonize the fish. That means that the BPA alternatives that caused the least developmental toxicity in the host fish generally produced the most significant microbiota disruption. This is important because disrupted microbial community structure has been observed in humans with gastrointestinal diseases and autism spectrum disorder.

While BPA exposure has been linked to a wide array of adverse health effects, this is the first study to show that BPA and its most commonly-used alternatives disrupt microbial community structure. The National Academy of Sciences recently released a report concluding that current risk assessment strategies used to protect public health do not fully consider the role microbiota may play in mediating adverse health effects stemming from chemical exposures.