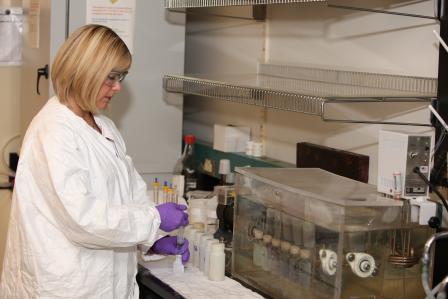 EPA researcher Karen Bradham uses a “virtual stomach” that mimics human digestion to determine if arsenic and lead in contaminated soils are bioavailable.EPA recently validated an innovative new technology to guide the cleanup of soils contaminated with arsenic and lead. The new laboratory method, based on a “virtual stomach” that mimics human digestion, estimates the bioavailability of arsenic and lead in soils quickly and inexpensively relative to animal models.  This method will increase the accuracy of Human Health Risk Assessments, potentially reducing remediation costs.

The method lowers bioavailability assessment costs by enabling simultaneous assessments for both arsenic and lead at contaminated sites. It has been used successfully by EPA Regional offices to develop clean-up strategies across the U.S., saving millions of tax payer dollars in clean-up costs, and interest in the method is growing internationally as well in countries including Taiwan, Australia, and Canada.

EPA scientist, Karen Bradham, Ph.D., along with Clay Nelson and Drs. David Thomas and Kirk Scheckel have been working on a bioavailability method that simulates how the human digestive system absorbs arsenic and lead in soil. “Bioavailability” refers to the amount of a substance that is absorbed by the body’s gastrointestinal system following exposure. In May 2017, EPA validated the method after it was shown to meet rigorous regulatory acceptance criteria (OLEM 9355.4-29, April 20, 2017). This means that States and public health risk assessors can use the method during cleanups at EPA Superfund sites and other locations with arsenic and lead contamination issues. In addition to protecting public health, the bioavailability method improves the accuracy of human health risk assessments.

The newly-validated method is sometimes called the “artificial stomach” because it mimics the human gastric system, but in fact, it doesn’t look like a stomach at all. It is a clear box that sits on a counter and contains small capped, plastic bottles. Each bottle holds one gram of soil in a clear amino acid solution, with a low pH of 1.5. Researchers flip a switch and the bottles begin rotating end over end in an incubator heated to 98-degress F, matching a person’s average body temperature. These conditions are carefully selected to mimic the digestion conditions of the human stomach. After a one-hour extraction period, the amount of lead or arsenic from the soil sample that is solubilized in the artificial stomach is measured to determine the bioavailable fraction of the toxic metal.

“Not all arsenic and lead present in soil are able to be absorbed into humans or animals and can cause harm," Bradham explains. "Certain forms of arsenic and lead are not bioavailable, meaning they are not fully absorbed by the human body" says Bradham.

Many years of work have started to pay off. Previously, if a site contained lead or arsenic in its soil and posed a potential risk, the remedy would be to remove the contaminated soil. Moving this much dirt is expensive. While disposal costs vary, they may account for up-to half of the total remediation costs.

Scientists and public health officials can now use the artificial stomach method to determine if arsenic and lead in contaminated soils are bioavailable and remove those specific sections of soil. For example, researchers evaluated arsenic-contaminated soil samples from a site using this method and found that only about half the arsenic was bioavailable. Based on this example, only about 90 acres of soil would need to be removed as opposed to the 117 acres that would have been slated for removal using chemical analysis for total metals only.  Those chemical analyses are based on measurements of total arsenic levels instead of that which is truly problematic for human exposure. The potential cost savings of the above example: $9 million.

The work of Bradham and her team of EPA researchers continues to progress, both in the U.S. and abroad. The scientists are currently testing how adding soil amendments to soils allows the elements to bind with lead and arsenic, potentially causing them to pass through the human gastric system unabsorbed. These remediation technologies are in the early stages, but are exciting developments for the field of public health.

This research is having an international impact. Researchers around the world are now using this validated method to test the bioavailability of soils. Bradham has trained scientists on using the method in Taiwan.  Scientists in Australia, the United Kingdom, and Canada are also using this method.

Bradham explained what she ultimately hopes for the bioavailability method as developments continue worldwide. “We need to keep sharing this method with researchers so they can implement it at contaminated sites to protect human health while saving millions of dollars in clean-up costs and reducing volumes of hazardous material.”