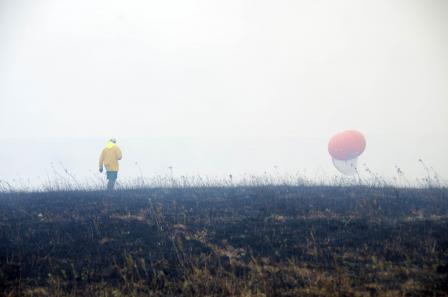 A researcher takes measurements using an aerial sampling system. The portable box-shaped system is attached to a helium-filled balloon called an aerostat and lofted up to 500 feet into smoke plumes. Published December 5, 2017

Central Kansas is home to the largest remaining tallgrass prairie in North America with five million acres in Kansas and portions of Nebraska and Oklahoma. Fires were once a natural occurrence, but now they are intentionally set during prescribed burns, primarily in the spring. The fires burn the invasive plants and rejuvenate the soil, which encourages growth of native grasses. This, in turn, benefits farmers and ranchers who graze cattle and bison on the land. However, the smoke plumes can contribute significantly to air pollution in nearby communities and farther downwind, sometimes as far as the East Coast, particularly when burning is concentrated during the short spring season.

EPA researchers are supporting best smoke management practices for prescribed burns of prairies to reduce the impact of smoke in nearby communities and those much farther away. In November, the research team traveled to the rolling prairies of Flint Hills, Kan., to take air measurements during the planned fires using a novel air sampling system developed in the lab. Researchers had previously visited the area in March during peak burn season to take air samples. They will use the two data sets to see if there are any differences in smoke plume emissions from spring to fall. 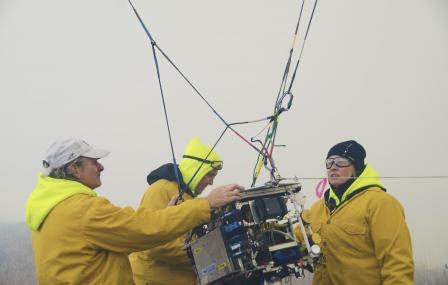 Smoke from prescribed burning contains air pollutants, notably combustion gases and particles, that can impact health. During burns, air pollution levels can sometimes exceed federal limits. People who are most vulnerable to these pollutants, such as those with lung and heart problems, are at greater health risk. The smoke can also cause the general population to experience irritation of the eyes, nose, and throat and cause visibility problems.

The Flint Hills study is providing air emissions data needed to better predict the best times, locations, and conditions to burn. To get measurements in the smoke plume, researchers take ground measurements and use an aerial sampling system to measure levels of particle pollution, black and brown carbon, and volatile organic chemicals, as well as impacted background ozone levels. The portable box-shaped system is attached to a helium-filled balloon called an aerostat and lofted up to 500 feet into smoke plumes.

The data will provide information more specific to the Flint Hills region for prescribed grassland burning that can be used in models to better predict where smoke plumes will go and how much pollution may form downwind and impact communities.  Better forecasts of smoke impacts will allow for better selection of days to do burning and better modeling tools will allow for more sophisticated understanding of regional pollution impacts from these types of burns.

“It takes broad partnerships, from ranchers and researchers to downwind-communities and regulators, to understand the benefits and challenges associated with the complex practice of the management of five million acres of tallgrass prairie in our nation’s heartland, says Josh Tapp, Deputy Director for the Environmental Sciences and Technology Division in EPA’s Region 7 Office in Kansas City.  “It is through these Flint Hills partnerships that common-sense practices can be refined and implemented to ensure the protection of public health while promoting sustainable agriculture and protecting an endangered ecosystem.”