Putting out the Fire: 50 Years of Science to Protect America’s Water

2020 marks the 50th Anniversary of the establishment of the U.S. Environmental Protection Agency (EPA), giving us an opportunity to highlight how our science has played a critical role in helping the Agency meet its mission to safeguard public health and the environment (see History of EPA Research).

This month the agency is highlighting its efforts to protect America’s waters, from helping communities provide safe drinking water and maintaining critical water infrastructure, to sustaining vibrant aquatic ecosystems and preventing and mitigating sudden or emerging challenges such as oil spills and chemical contamination.

That work has made a profound impact improving the nation’s water resources since the Agency’s establishment. 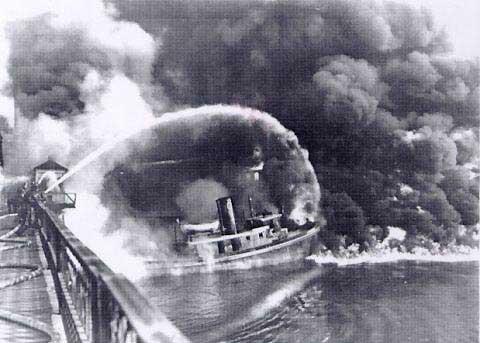 The Cuyahoga River on fire in 1952. The river caught fire at least 13 times and helped spur an avalanche of water pollution control activities such as the Clean Water ActFifty years ago, floating debris and open pipes spewing industrial effluent into local streams and rivers were fueling a growing unease about the nation’s troubled waters. Then, a wayward spark from a passing freight train ignited an oil slick and other debris into a raging conflagration on the surface of Ohio’s Cuyahoga river, spewing thick, black plumes of smoke into the surrounding community. That and other incidents of burning rivers helped turn unease into a national call for action.

EPA researchers were among the first to answer the call.

The Agency’s first scientific laboratories were set up in an urgent effort to better understand the state of the nation’s deteriorating water resources, pinpoint sources of trouble, and deliver solutions. There, EPA researchers pioneered water quality assessment methods that became the foundation for health- and biological-based standards and for regulating the discharge of pollutants into the nation’s waterways. Lessons learned ushered in actions to control water pollution, most notably the Clean Water Act and the Great Lakes Water Quality Agreement.

Agency researchers played a critical role in developing the first national drinking water standards. And in support of targeted efforts to minimize levels of contaminants such as lead and copper, they pioneered ways to better understand the complex dynamics linking water treatment chemistry with corrosion and leaching risk in water service lines.

Collaborating with states, local communities, and water utility operators was an early and enduring priority for Agency researchers. They worked directly with partners to learn firsthand about local challenges to maintaining drinking water safety and handling stormwater runoff, and then worked to provide accessible tools and models to meet those challenges. Many of those resources, such as the Stormwater Water Management Model and EPANET, have continued to be updated in response to the ongoing input of local partners and are still widely used today.

EPA wetland biologists and ecologists conducted the first assessments of the nation’s wetlands and inland water resources. In 1972, they began to work with their counterparts in Canada to conduct the science necessary to clean-up the Great Lakes. That work continues today, supporting the cleanup of contaminated sites in ways that’s capture and sustain the benefits that coastal aquatic ecosystems provide to local communities.

EPA’s record of scientific achievement has played a key role in helping the Agency protect America’s waters. In the process, they helped extinguish an era marked by burning rivers and usher in a new generation of innovative protocols and analytical methods that is helping the nation tackle ever more complex challenges to our water resources. We invite you to learn about those and future success stories here in Science Matters.