In 1992, the City of Madison, Wisconsin, found concentrations of lead in their drinking water exceeding the 90th percentile action level of 0.015 mg/L set by EPA. Lead (Pb) is a naturally-occurring metal that was commonly used in household plumbing materials, such as lead service lines and leaded solder joints, before limits were set on its use in 1986. 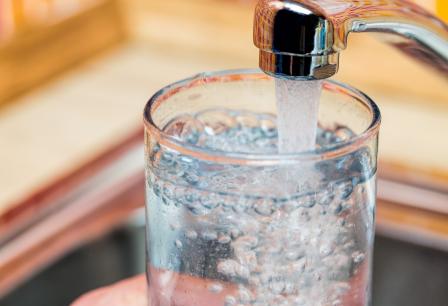 However, in houses built before 1986, lead pipes can still be in use. Lead is rarely found in source water, but it can enter tap water as the water enters pipes with lead in older systems. Since some homes have lead service lines, the water coming into the house may be transported via lead pipes even though there are no lead pipes inside the home. Brass plumbing fixtures can also contain small amounts of lead.

The Madison Water Utility chose to implement full lead service line replacement from 2001 through 2011 to eliminate the most significant source of lead in its water system. In 2003, sixty home taps were monitored after full lead service line replacement. They found that lead levels in the first liter of water were still high at some sites where the lead service line pipes had mostly been replaced within the previous four years. This phenomenon had been seen in other water systems, which had puzzled drinking water practitioners as to why elevated lead levels could persist for so long.

Coincident to the Madison Water Utility studies before and after the lead service line replacement program, lead service lines had been harvested from the water system and sent to EPA scientists.  The EPA had the instrumentation and unique expertise to search for clues of lead release in pipe scales.  That is, the materials that build up on the inside of pipes display chemical characteristics that reflect the chemical processes occurring in the water system, including the release of lead. The EPA conducted detailed analyses—color, texture, mineralogical and elemental composition--on five lead service pipe samples excavated between 2001 and 2006 from two different Madison neighborhoods.

Before the lead service line replacement program, Madison’s water was delivered by an estimated 8000 lead service lines, which had been in service for 75 years or longer. The city’s drinking water originated from numerous wells.  The first set of lead service lines studied by EPA revealed that a highly insoluble and protective lead oxide compound had formed on the pipe walls.  If all lead pipe walls had this formation, high lead releases would not be expected in the water system.

However, the second set of lead service lines came from a different neighborhood in the city.  This neighborhood was fed by wells that were rich in manganese and iron. Both manganese and iron can form scales and accumulate metals, such as lead, from upstream sources especially from upstream corroded lead pipes. EPA’s results revealed that the accumulation of manganese and iron from the well water onto pipe walls had adsorbed lead and had the potential to crumble from the pipe walls and carry the lead to consumers’ taps by means of the scale particulate matter entrained in the water.  This finding corroborated with the results of the 2003 study where the higher lead concentration found at consumers’ taps was mostly in particulate form.  The presence of the manganese and iron scale on the pipe walls was the reason for high lead release in parts of the Madison water system, before and even after the lead pipes were removed.

As the 2003 residential study had shown, once the principal lead source was removed, it took more than four years in some cases for the accumulated lead to be released, which explains why lead levels remained high after the lead pipes had been replaced. Eventually, removing the source of lead did eliminate the significant lead concentration and achieved compliance with EPA’s regulations.

Overall, this research showed that controlling lead exposure from water is more complicated than simply adding corrosion control chemicals to reduce the solubility of lead minerals. Buildup of manganese and iron scale in water pipes should also be considered as a source for accumulating and releasing lead, and other contaminants of concern, into water. What happened in Madison highlights the importance of analyzing pipe scales to understand how lead accumulates and releases into the water over time. This EPA research received both the 2015 American Water Works Association’s Distribution & Plant Operations Division Best Paper Award and the overall Journal of the American Water Works Association’s overall Best Paper Award.