The Science Behind Wildfire Smoke’s Toxicity 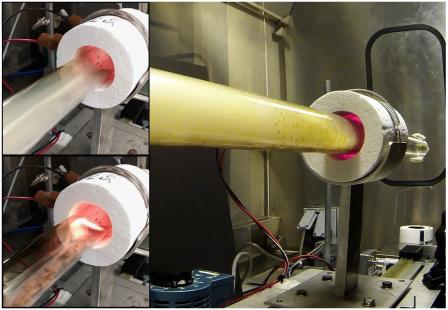 Where there is smoke, there is fire…and also air pollution.

The toxic effects of wildfire smoke when chokingly thick can cause serious health risks and even death for those caught too close. But what about the health effects of smoke from wildfires or prescribed fires when there is a noticeable haze over a community for days, weeks and sometimes months?

In a laboratory in Research Triangle Park, NC, researchers are using an innovative furnace tube system to study the health effects of smoke in controlled conditions. They are investigating whether particles in smoke have different health effects depending on the type of wood burned and the stage of the fire such as flaming or smoldering.

In the United States, forests and woodlands vary from region to region, from chaparral type scrub on the coast of California to red oak in the Midwest and East, as well as pine across the country. The question scientists are asking is: “Does the smoke from a wildfire pose a greater health risk based on the type of wood and intensity of the combustion?”

“Smoke from wildland fires and prescribed burning is now a major component of air pollution in the United States and its characteristics and potential health effects need more thorough investigation,” says EPA researcher Ian Gilmour Ph.D. “The toxicity studies being conducted will provide new insights into how to protect public health from potential effects of smoke exposure.”

Studies at EPA on the health effects of wildland fire smoke had their start in 2008 when a large peat fire in eastern North Carolina produced haze and air pollution that far exceeded air quality standards.  Using satellite imagery and hospital records, researchers found a link between smoke from peat fires and an increase in hospital visits for symptoms of heart failure as well as respiratory problems relating to asthma, COPD, pneumonia and bronchitis.  They also collected samples of the smoke and found that the particles worsened indicators of lung and heart disease in mice, to a greater degree than the same amount of particles collected after the fire was controlled. 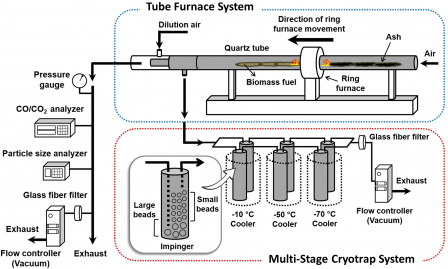 Figure 1. Diagram of the biomass combustion and smoke collection system. The tube furnace system consisted of a quartz tube and a ring furnace that traversed along the length of the quartz tube and was able to sustain stable flaming or smoldering phases consistently for 60 min. The multistage cryotrap system had three sequential impingers that were cooled cryogenically at −10, −50, and −70°C, permitting the capture of PM and semivolatile organic compounds from the biomass smoke emissions.While these observational studies provide important health information, the researchers wanted to study the potential toxicity of smoke under more controlled laboratory conditions. They adapted test methods from the tobacco industry and developed a furnace system that can be used to simulate smoke from wood-burning fires. Biomass fuel samples are combusted by moving an insulated furnace down a thin line of wood chips placed on the bottom of a long glass tube.  The temperature of the furnace can be raised or lowered to create flaming or smoldering conditions, and the smoke is collected in chilled flasks where it is analyzed and used to assess health effects in cell and animal studies.

In a study published in the journal Environmental Health Perspectives in January 2018, the greatest lung toxicity was from eucalyptus, which is representative of chaparral-type wood.  The study also found that smoke from pine wood, which is broadly distributed across the United States, caused genetic mutations in bacteria, which is an indicator for the development of cancer.  Overall, the results suggest that emissions from fires in regions rich in those type of fuels may induce greater health effects than those from fires of similar magnitude with other types of trees.

Newer results examining direct inhalation of the smoke are confirming the same general pattern of effects between different fuel types and combustion conditions, and are also showing that the smoke can affect lung function as long as 24 hours after the exposure.  Additional studies examining cardiovascular effects as well as comparing the impact of single, intermittent or longer term exposures are being planned.

The research providing more information on the toxicity of wildland fire smoke can be used by air quality managers and health professionals to protect public health. If fires from a particular forest show a greater potential for causing respiratory or heart problems, for example, advisories can be adapted to inform first responders and the general public.