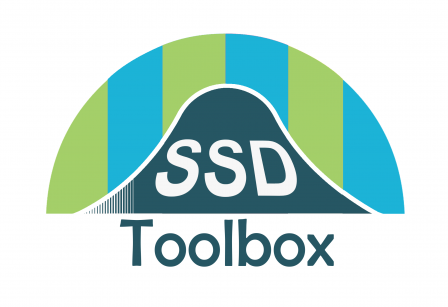 EPA scientists have developed the Species Sensitivity Distribution (SSD) Toolbox to help assessors determine potential risks from chemical exposure, while taking into account the range of sensitivities among different organisms. The “desktop” tool makes for quicker, more consistent statistical analyses to identify chemical concentrations in surface waters that may harm the most vulnerable affected species.

The SSD Toolbox uses toxicity test results—data on the extent to which a chemical can damage an organism—collected from the lab or field from multiple species for a given chemical. Some typical aquatic invertebrates included in these tests are Daphnia magna, Ceriodaphnia dubia and Hyalella azteca, but the tool can be used for other taxa as well, including fish and terrestrial vertebrates.

One of the strengths of the SSD Toolbox is the ability for the scientist to get a holistic view across taxonomic (i.e. Family, Genus, Species, and so on) groups. This means that as we learn more about similarities between taxa, we might be able to predict how a chemical will affect a species, or other taxonomic group, in the absence of data. The study of these similarities, like evolutionary traits and relationships among individuals or groups of organisms, is called phylogeny.

“There’s an emerging consensus that incorporating phylogeny in species sensitivity distributions may help identify taxa at the greatest risk,” says EPA researcher Dr. Mathew Etterson, the lead for this project.

First, am I using the appropriate method to analyze my data?

Imagine trying to use a ruler to measure how much liquid is in a container —you could get a measurement, like height, but you wouldn’t have the information you set out to find: volume. Though this example seems like an obvious mistake, it is often difficult for scientists to know if they are using the right tools and methodologies to analyze data.

Second, is this distribution a good fit?

Probability distributions help us visualize existing data and make educated guesses when we don’t have data. Normal distributions are very common, with the data points generally fitting inside a bell curve that is evenly distributed across the left and right side of the y-axis. An ill-fitted distribution could lead to biased conclusions from the scientists, and therefore, mislead regulatory actions.

Finally, does my data fit my underlying assumptions?

To understand why this question is asked, we can go back to the example of measuring an amount of liquid with a ruler. In this case, the underlying assumption is that the height data from the ruler tells us something meaningful about the amount of liquid. Though this does not give us a measurement of volume, the data might guide us to ask different questions, maybe about width and length. Sometimes scientists expect underlying assumptions to be violated when modeling real-world phenomena. For example, a dataset may be skewed towards sensitive or tolerant species, or there could be a measurement error in the underlying toxicity data. Scientists are often forced to contend with these limitations related to “fit”, but the SSD Toolbox includes methods for evaluating the fit of a distribution to the dataset to help determine whether the underlying assumptions are met.

In the future, Dr. Etterson hopes to build in enhanced statistic modeling possibilities into the SSD Toolbox. For example, he wants to incorporate known qualitative differences between groups of organisms exposed to the same chemical (i.e., the expectation that pesticides affect invertebrates more than vertebrates). Including more specific information like this will allow the Toolbox to provide more consistent findings to the scientist and ultimately, the policy makers.

“An SSD is the simplest possible model for chemical toxicity – it assumes all variation is random,” says Dr. Etterson. “An important next step is to acknowledge that there is systematic variation among taxa in sensitivity to toxicants, for example, due to differences in physiology.”

Errors from random variation occur by chance, like an environmental condition affecting the data collection, and errors from systematic variation are introduced due to inaccuracies in observation or measurement.

“The next generation of SSDs should incorporate both kinds of variation into our statistical models,” says Dr. Etterson.