Teaming Up to Protect the Great Lakes 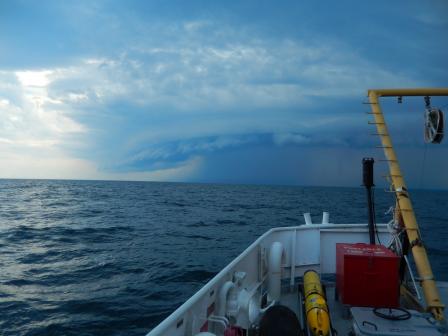 The view from EPA's research vessel, the Lake Explorer II, between Toronto and Whitby, Ontario in July 2018. Researchers were aboard the vessel collecting data on the health of the Great Lakes. Spanning more than 750 miles from east to west, the Great Lakes are one of the world’s largest surface freshwater ecosystems. About one in ten Americans live in the Great Lakes basin and the Lakes provide these communities with water for drinking, transportation, power, recreation, and a host of other uses.

That’s why it is so important to make sure these lakes continue to be healthy ecosystems that serve the environment and the surrounding community. One of the ways EPA researchers help to do this is by participating in the Great Lakes Cooperative Science and Monitoring Initiative.

As part of the Initiative, EPA works with organizations from the US and Canada to assess conditions in one of the five Great Lakes each year. The survey focuses on different research areas including phosphorus and nitrogen input and movement through the food web, phytoplankton and zooplankton populations, and fish diet and distribution. Much of this data collection takes place aboard EPA’s research vessels, the Lake Guardian and the Lake Explorer II.

This year, the team focused monitoring efforts on Lake Ontario, which is the smallest of the Great Lakes and shares the border between New York and Canada. The researchers were interested in characterizing nutrient distributions, watershed loading, and nutrient related problems, such as harmful algal blooms. From May to September, researchers took regular sampling cruises to collect data. Researchers aboard the vessel take samples of water, aquatic life, sediments, and air. The data gathered provides information about water quality and aquatic life that researchers use to assess the overall health of the Great Lakes ecosystem.

But the Lake Guardian and Lake Explorer II aren’t alone out there—there’s also EPA’s autonomous Slocum glider, the Nokomis. The researchers can guide the glider to areas of interest, such as regions with high nutrient input. This year, the glider spent a great deal of time collecting data in the Niagara River, which flows north from Lake Erie to Lake Ontario. The Nokomis dives as it moves across the lake, collecting high-resolution data every half second on temperature, chlorophyll-a, colored dissolved organic matter, and suspended matter and sending information to a crew of scientists back on land. These measurements are especially useful if they are combined with sampling by research vessels. A glider can also continue to collect data during storms and adverse conditions, when it would be risky to have a team out on a boat.

The data collected aboard the research vessels and by the glider provide the team with a better understanding of the overall health of the lake. This research helps determine which areas are most at risk and which projects and restoration efforts need to be prioritized.