TEMPO: A New Era of Air Quality Monitoring from Space 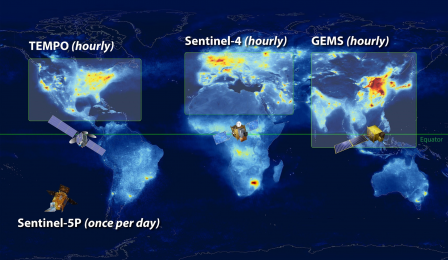 Constellation of geostationary air quality satellites in the northern hemisphere, along with European Space Agency Sentinel 5P TROPOMI polar orbiting satellite. Image: NASA LaRUnderstanding what’s in our air, including pollution and its sources, is important to safeguard public health and the environment. Satellites have become essential tools for tracking weather events like thunderstorms, tornadoes, and hurricanes, as well as for improving daily weather forecasts. Now, satellites are increasingly being used to monitor air quality and the movement of pollution in the air we breathe.

EPA scientists are currently collaborating with the National Aeronautics and Space Administration (NASA), the Smithsonian Astrophysical Observatory (SAO) and the National Oceanic and Atmospheric Administration (NOAA) on a project that will use satellites to examine air quality across North America. Launching in 2022, the Tropospheric Emissions: Monitoring of Pollution (TEMPO) satellite instrument will monitor air quality during the daylight hours in geostationary orbit, at a vantage point about 22,000 miles above Earth's equator.

“Geostationary satellites orbit the Earth’s equatorial plane at a speed matching the Earth’s rotation,” explains EPA senior research scientist, Jim Szykman. “This allows the instrument to stare at the same position on the earth’s surface and monitor changes over one location throughout the day. TEMPO also has the capability to measure air quality during the daylight hours across North America,” he adds.  “This will enable us to evaluate how the pollutants being measured are changing over different time periods through the day and evaluate different processes that influence the level of pollutants.”

How can weather impact our air quality?

Weather satellites used by NOAA can easily track the evolution of aerosols released into the atmosphere from dust-storms and large wildfires, but aerosols can also be formed by gaseous pollutants such as nitrogen dioxide, sulfur dioxide and formaldhyde, which react to form particles and ozone. TEMPO will be able to observe these gasses at much higher temporal and spatial resolution than weather satellites.

These measurements will allow researchers to observe pollutant emissions and see how pollution episodes evolve over hours, days, and weeks, interacting with weather patterns as they move across the landscape.

“The interaction between weather and the level of pollutants in the atmosphere controls the air quality we experience throughout the day, impacting the amounts of ozone and particulates that are present in specific areas,” Szykman says. “Sunshine, rain, higher temperatures, wind speed, air turbulence, and mixing depths all affect pollutant concentrations.” 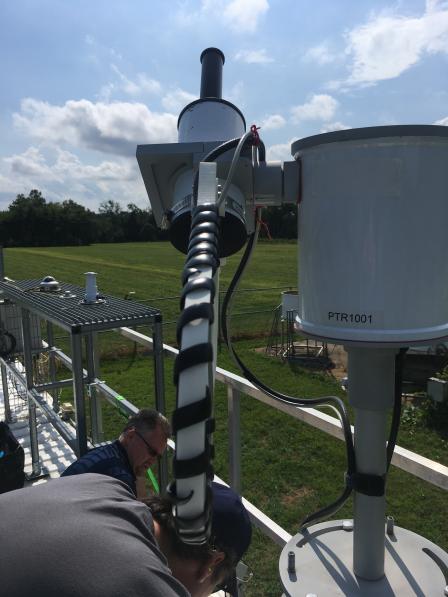 TEMPO is part of NASA's Earth Venture Instrument program and will join similar satellites, including South Korea’s Geostationary Environment Monitoring Spectrometer (launched in February 2020) and the European Space Agency’s Sentinel-4 (launching in 2023) to form a global air-quality satellite constellation. Together, these satellites will provide coordinated observations of air pollution across all continents in the northern hemisphere.

As members of the TEMPO science team, EPA scientists are collaborating with NASA and other state and local agencies to build an air quality validation network of ground-based spectrometers, called Pandoras, at air quality sites across the country.

Anticipated benefits and applications of TEMPO data include:

Kelly Chance, of Smithsonian Astrophysical Observatory who is TEMPO’S Principal Investigator, looks forward to continuing a close collaboration with EPA after TEMPO’s launch.

“EPA is a critical partner in TEMPO, as they are the national agency for the measurement and control of environmental health factors,” Chance says. “TEMPO measurements will be directly used by EPA for air quality and health applications, provision of customizable publicly-available data, pollution forecasts and inventories, regional and local transport of pollutants, and air quality responses to changes in emissions. The EPA TEMPO partnership will significantly improve our understanding of the North American environment and its potential impacts on the health of humans, animals and crops.”