SPods (in blue) are fenceline monitoring devices developed by EPA to measure air pollutant plumes at an industrial facility.  EPA scientists tested them at EPA’s research campus in RTP, NC, alongside prototypes designed by commercial developers using the open source SPod technology.  New cost-effective approaches to measuring air pollutants at the fenceline or in communities near industrial facilities can help identify and control air pollution that may drift across property lines. The benefits include reduced operational expenses for companies and improved air quality. Over the past five years, EPA researchers have been developing low-cost and portable Next Generation Emission Measurement technologies that can be deployed next to an industrial complex for emissions testing. The research is being conducted in collaboration with industry, states, and communities.

“The long-term goal of this research is to modernize approaches to source management for certain sectors so we can do a better job of protecting the environment and save companies money,” says Eben Thoma, lead investigator at EPA.

Companies can manage air pollutants that are emitted from smokestacks or tailpipes using existing measurement and control technologies. In contrast, “fugitive emissions” escape from some industrial processes or equipment leaks in facilities such as refineries, chemical plants, and energy production operations. The fugitive pollutants are difficult to identify, measure, and track, and can include many different volatile organic compounds (VOCs).

For neighborhoods and communities living close to industry, emissions may be a concern to health and wellbeing. The release of VOCs can lead to ozone formation, and many of the compounds are hazardous air pollutants that can contribute to harmful health effects.

One measurement technology developed by EPA that has shown promise is called the SPod, a solar-powered sensor system that is portable, lower-cost, and can be placed at a facility’s fenceline. The instrument detects and locates plumes of air pollutants, including VOCs, that are being emitted.

“The SPod is a simple sensor,” Thoma explains. “Its job is to protect the fenceline by detecting whether VOC emissions are present and providing wind and concentration data to help identify the source and speed repair of emissions if required.”

The SPod is an open-source design that has been shown in field studies to provide useful emission detection information. EPA has shared the design with dozens of interested early-adopters to encourage improvements and commercialization.

“We have shared the SPod design with anyone interested,” says Thoma. “We did not patent the technology because we want to spur innovation in the marketplace.” 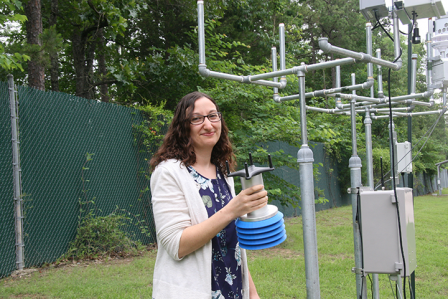 EPA scientist Ingrid George holds an SPod, a fenceline monitoring system developed by EPA that can identify air pollution plumes from leaks or other fugitive emissions at the perimeter of an industrial facilities. Three early SPod-like prototypes, developed by interested parties, are being evaluated by Thoma and his colleagues at EPA’s research laboratories in Research Triangle Park, NC. The devices are being compared to the Agency’s research SPod, as well as more sophisticated and expensive measurement instruments. The goal is to take the prototypes to a community called Rubbertown in Louisville, KY, where EPA, industry, the Louisville Air Pollution Control District, and other partners are participating in a field study to evaluate the SPod and other technologies. The area has faced challenges related to the control of ozone and exposure of pollutants to local communities.

Researchers are also in the early stage of testing a new mobile version of the SPod that can be used on a truck or moved around inside an industrial facility instead ofplaced around the perimeter of a facility. Taking the SPod concept another step forward, EPA researcher Ingrid George is developing the VOC Emissions Tracker (VET), a lower-cost emission measurement system that can be easily deployed in the field to help detect VOC emissions and locate their sources.

The samples can be sent to the lab for analysis for a wide range of VOCs, to further identify their sources.

For a pilot study in Dallas, TX, the VET has been customized to measure xylene, a VOC, to assist EPA and Texas with determining the source or sources that may be contributing to elevated levels of the pollutant in the city.  Xylene contributes to the formation of ozone and is a hazardous air pollutant. The tracker is undergoing testing and will be deployed in Dallas later this year for its first field demonstration.

“I think the VET system could be a very useful tool to understand different sources of VOC emissions, help industry reduce their cost of locating and repairing leaks, and improve air quality in communities in the area,” says George.

The new emissions measurement technology being developed and tested at EPA is providing new solutions to complex air quality problems that exist in some parts of the country.