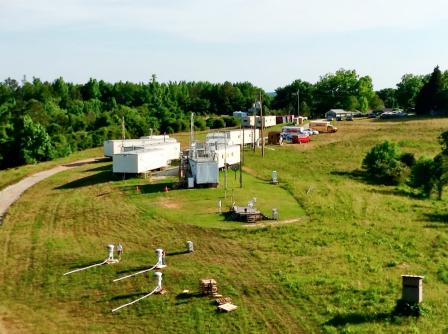 The site of the study in Brent, Alabama. During the summer of 2013, some 60 atmospheric scientists converged in Alabama, Tennessee, and North Carolina for one of the largest air monitoring studies in the region in two decades. Called the Southern Oxidant and Aerosol Study, the scientists set out to study everything they could about the physical and chemical interactions of many pollutants in the atmosphere. Among other inquiries, they wanted to more fully understand why the region was experiencing elevated levels of secondary organic aerosols (SOAs).

SOAs are air pollutants produced from emissions from trees and plants and human-made sources. They are produced through a complex interaction of sunlight, air pollutants from cars or industrial emissions, and other airborne chemicals. SOAs are also a major component in the production of fine particle pollution (PM2.5), which can cause or worsen lung and heart problems and other health effects. Trees provide many benefits, including natural beauty, shade, support of ecosystems, and absorption of carbon dioxide—a pollutant and greenhouse gas—but they also emit chemicals called volatile organic compounds (VOCs). Researchers from EPA, other agencies, and universities found that when VOCs from vegetation interact with human-made pollutants, air quality problems can get worse.

Prior research pointed to the mixing of human-made and naturally-emitted pollutants as a major factor in SOAs creation and therefore fine particle pollution, which is regulated under the National Ambient Air Quality Standards (NAAQS). The study confirmed that chemical interactions of these pollutants lead to more PM2.5 in the Southeast United States, a region that is heavily forested and contains large urban areas such as Atlanta.

“Results from this study and the umbrella study, Southern Atmosphere Study, provide chemical insight into how current and planned federal air quality rules regarding human-made nitrogen oxide and sulfur dioxide emissions provide additional benefits by also reducing organic fine particle mass (from trees and vegetation),” says Annmarie Carlton, a recipient of a grant from EPA’s Science to Achieve Results (STAR) program, who is a lead investigator in the study. “The findings suggest the U.S. Clean Air Act is more successful at safeguarding human health than many assessments suggest.” These results are described in the paper, Additional Benefits of Federal Air-Quality Rules: Model Estimates of Controllable Biogenic Secondary Organic Aerosol, by Carlton et al.

Carlton and colleagues applied the chemistry data collected in the research campaign to EPA’s air quality model, called the Community Multiscale Air Quality Modeling System (CMAQ), which is used by states to implement air quality standards. They found that human-made pollution helps to transform naturally-emitting VOCs from trees into fine particles. So, when emissions from motor vehicles and industry are reduced by air quality management, the opportunity for interaction with VOCs from trees and plants goes down. The result: less production of SOAs and less formation of PM2.5.

The study employed a wide array of sophisticated air monitoring instruments not available previously that enabled scientists to gain greater knowledge of what is occurring when multiple pollutants mix and interact. They took measurements on the ground and at high elevations using balloons and aircraft to obtain data on ozone, nitrogen oxides, VOCs, semi-volatile organic compounds, sulfur dioxide, particulate matter.

The entire body of research from these studies has made significant contributions to the understanding of air pollution in the eastern United States and provided the science needed by decision-makers to further improve air quality in the region. A second paper, Synthesis of the Southeast Atmosphere Studies: Investigating Fundamental Atmospheric Chemistry Questions, by Carlton et al., provides a comprehensive synthesis of major findings of the two studies.

In the paper, Carlton explains how researchers have gained insight into the extent to which airborne particles play a role in regional temperature trends and how human-made and natural pollution sources interact and affect air quality and climate. They have learned more about how air chemistry changes as an air mass ages and is transported across a region; how much SOA comes from various sources (trees, motor vehicles, industry, wildfires, etc.) and whether carbon found in airborne particles comes from natural sources (trees and other vegetation), or from human-made emissions from cars, trucks, trains, industry, or coal-fired power plants. The extensive research has generated more than 111 published papers, providing a wealth of data and findings that have been made available to the public that can be used for further research and analysis.

Editor's note: This article originally appeared in the November 2018 issue of EM Magazine, a copyrighted publication of the Air & Waste Management Association (www.awma.org).