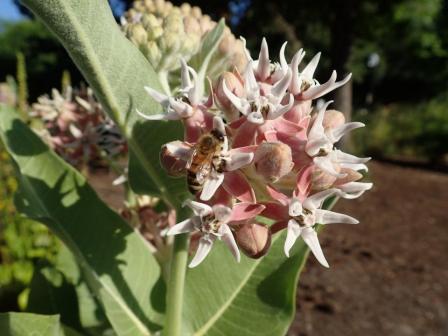 A honey bee gathers pollen from showy milkweed flowers. Photo credit: Bonnie Smith.When bees aren't buzzing around picnic tables and the sweet-smelling drinks on your patio, they are hard at work pollinating flowers and crops, and making the honey and beeswax we enjoy. Honey bees play a vital role in crop production. In fact, honey bees’ pollination contributes to over half the value of the United States’ $29 billion per year agriculture industry.

Despite their importance, honey bee colonies have declined in Europe and North America. Scientists have identified multiple factors influencing this decline, including diseases and pests, poor bee nutrition, lack of genetic diversity, bee management practices, and pesticides. In May 2018, an EPA research team published Sensitivity analyses for simulating pesticide impacts on honey bee colonies, which builds upon a recently-developed model to provide scientists with a clearer understanding of how pesticide exposure affects honey bees at the colony level.

Scientists first needed to answer two questions: “how are pesticides applied?” and, “how are honey bees exposed?” Researchers focused on three main application methods that are often used to treat crops: direct spray, which is often used around homes and gardens, and soil and seed applications, typically used in larger treatment systems.

Once they identified the pesticide application methods, scientists focused on two routes by which honey bees are exposed. Since bees fulfill their nutritional requirements through consuming a combination of nectar, honey, pollen and bee bread, which is stored pollen combined with nectar or honey, scientists identified direct contact and consumption of pollen or nectar as the two main exposure routes.

Seem straightforward? Actually, gaining an accurate understanding of honey bees’ short-term exposure to pesticides is challenging on multiple fronts since there are many influential factors that might alter findings.

“The honey bee colony is essentially its own organism,” says Carmen Kuan, the study’s lead author. Each bee has its own job. Forager, or worker, bees are typically the ones who pollinate crops and flowers, and bring nectar back to the hive, while queen bees lay eggs.

Also, says Kuan, “Environmental conditions can be influential on both the individual and colony levels. For example, pesticide exposure at the individual level might be lethal, sublethal or altering to the behavior of the bee. At the colony level, this exposure might impact an entire hive, species, or (eventually) crop yields.”

Considering all of this, the EPA team took what they knew about application methods and exposure routes and applied this knowledge to the VarroaPop + Pesticide model, which predicts the population growth and behavior of a honey bee colony infested by Varroa mites.

“This model is a modified version of BEEPOP, developed by Gloria DeGrandi-Hoffman at the USDA Carl Hayden Bee Research Center in Tucson, Arizona,” says Kuan. Scientists used VarroaPop + Pesticide to estimate pesticide consumption intake for individual bees by multiplying food intake rates by pesticide concentrations in pollen, nectar and jelly from the hive. They also calculated the mortality percentage of bees via the two exposure routes.

Using data from the VarroaPop + Pesticide model and Monte Carlo simulation, which is a method that distributes a wide range of possible outcomes, scientists simulated all combinations of pesticide application methods and routes of exposure. They used four different sets of Monte Carlo simulations: direct spray, soil application, seed treatment and a control simulation where pesticides were not applied.

All simulations, which accounted for 10,000 adult worker bees, were run for a duration of three years from January 1, 1988 to December 31, 1990. These dates were chosen by the research group in order to incorporate historical records of meteorological data to the simulations.

Researchers found that queen strength and forager lifespan are critical factors for colony survival, regardless of pesticide exposure.   Additionally, honey bee colonies exposed to direct spray and soil application methods exhibited the least recovery, so these application methods have the strongest impact on colony dynamics.

Colonies exposed to pesticides via the seed application method showed little difference compared to the control scenario, where no pesticides were used.

Another important point is that sensitivity analysis also reveals that the relative importance of these parameters fluctuates throughout the simulation period depending on the pesticide application method and timing of exposure.

Now that scientists have developed the VarroaPop + Pesticide model to simulate pesticide exposure at the colony level, they can begin incorporating more pesticide data, such as application rates and honey bee toxicity information. This important work helps to ensure honey bees’ role in a vibrant and high-quality crop environment.