The document below is the renewed memorandum of understanding (MOU) signed on November 15, 2018 by U.S. EPA Acting Administrator Andrew Wheeler with the signatories of the National Vehicle Mercury Switch Recovery Program (NVMSRP).  The MOU was renewed as part of America Recycles Day, and participants at the EPA Recycling Summit also signed on to a national pledge to increase recycling efforts. 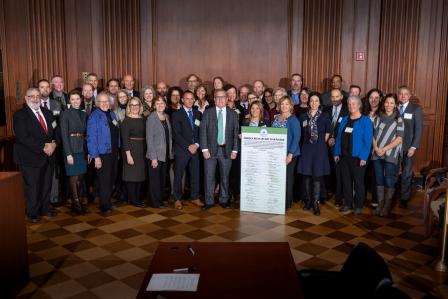 During the November 15, 2018 Recycling Summit, EPA and 44 participants signed a unified pledge to commit to work together to improve the state of the recycling system in the United States.  Click the image to view a larger version. Involving more than 10,000 recyclers, the NVMSRP has already removed and safely recycled more than 6.8 million mercury switches, containing a total of more than 7.6 tons of mercury.  EPA’s Smart Sectors program renewed the MOU with the NVMSRP, a collaboration for reducing mercury air emissions initially designed by EPA’s Sectors program and its partners in 2006.  By diverting the switches from the waste stream, the program has prevented the release of mercury into the atmosphere.

The program was set to expire in 2017; however, given its effectiveness, EPA re-joined the MOU, which is now extended to 2021. Other parties to the MOU include the Steel Manufacturers Association, the American Iron and Steel Institute, the End of Life Vehicle Solutions Corporation, the Automotive Recyclers Association, and the Institute of Scrap Recycling Industries. Read the press release  and an additional EPA press advisory issued on November 15, 2018.