From 2017 to 2018, a preliminary analysis was conducted by the US EPA and the Pacific Northwest National Laboratory (PNNL) to investigate the transport and accumulation patterns of marine debris entering the Salish Sea. The increasing levels of marine debris accumulation in the Pacific Northwest has been identified as a significant concern to the health of the Salish Sea marine ecosystem. For the purposes of this project, marine debris transport was analyzed using a particle tracking model and the Salish Sea Model (SSM). The SSM was developed through a collaborative effort between PNNL and state and federal agencies and was used to model water circulation and transport throughout the Salish Sea watershed. The study sought to answer the 4 questions outlined below.

The first question this study sought to answer where microplastics would accumulate if they were uniformly entering the Salish Sea. Using the above listed models, researchers estimated that microplastic particle distribution could look like the below map. Using computed time averaged particle concentration (density) factors to account for different localized regions susceptible to debris accumulation, they found that specific parts of the Salish Sea and Puget Sound region would have higher residence times for these harmful particles. 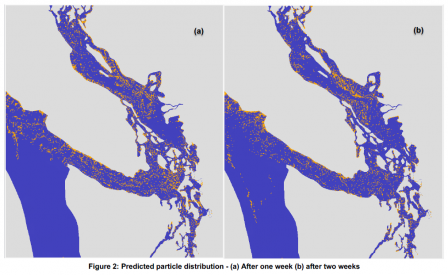 The third question the study sought to investigate was 3) the potential for microplastics to accumulate in regions where shellfish beds are located. Using data collected by Puget Soundkeeper and the Washington State Department of Health, researchers predicted that certain shellfish sites will be more impacted by the continuous release of microplastics from wastewater outfalls and their expected long-term accumulation patterns.

The final task of the study was to investigate 4) where macro trash (greater than 5mm) would accumulate if it was uniformly entering the Salish Sea watershed. Simulations factored for closed, empty water bottles influenced by both wind and water drag as well as water bottles filled with water and partially submerged in the water column, therefore only influenced by water drag. Depending on wind magnitude and direction, larger quantities of macro trash were predicted to accumulate on shorelines.

Until this study, there was a shortage of information and data used to identify the potential sources of marine debris and predict the fate, transport, and accumulation of debris in the Salish Sea, particularly in the Puget Sound region over a longer timespan.

EPA Regions 1, 2, 3 and 9, along with EPA Office of Research and Development (ORD) researchers from the Atlantic Ecology Division in Narragansett, Rhode Island, are collaborating on a Regional Applied Research Effort (RARE) project to quantify the recovery of microplastics in sediments with commonly-used methods published in the scientific literature. To support this RARE, Region 3’s Trash Free Waters coordinated partnered with ORD to support the development of a national approach to extracting microplastics from sediment through ORD’s Regional Research Partnership Program (R2P2). The R2P2 allows regional staff the opportunities to work directly with ORD labs on a regional issue. 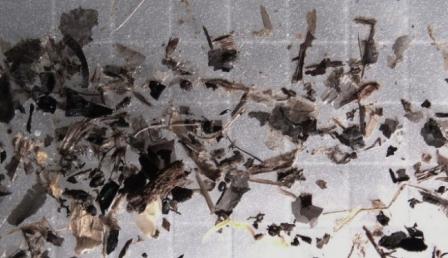 Example of plastic debris under a microscope from Region 3 sediment sample.Region 3 is an urbanized region with many working rivers vulnerable to plastic pollution situated in and around major port cities including Philadelphia, PA; Pittsburgh, PA; Baltimore, MD; Norfolk, VA; Wilmington, DE; and Washington DC. The most threatened watersheds and estuaries are recognizing the emerging concerns of microplastics and its impact on the ecosystems they serve. There is concern that the presence of high concentrations of microplastics in benthic environments will have adverse ecological effects. To accurately quantify the risks associated with exposure to micro/nano plastic pollution in the aquatic environment, methods are needed to measure sediment microplastics. The goal of this RARE project was to help determine the strengths and weaknesses of some of the more common published methods.

Currently, methods to isolate and extract microplastics from sediments differ vastly in their approach. For example, they use a range of filters, sieve sizes, aeration, physical mixing, chemical oxidation and density gradients to separate the microplastics from other sediment constituents (e.g., organic matter, inorganic particles). The Region wanted to gain hands-on experience in microplastic sampling, laboratory methods and identification to provide greater support to watershed partners and key external stakeholders. Project partners worked with researchers at ORD’s National Health and Environmental Effects Research Laboratory (NHEERL) Atlantic Ecology Division’s Population Ecology Branch to test a new hybrid methodology for isolation and extraction of microplastics from subtidal estuarine sediment in Region 3. According to NHEERL, this “hybrid methodology” takes the ‘best of the best’ procedural components of the five explored methodologies and creates a new method to isolate and extract microplastics. 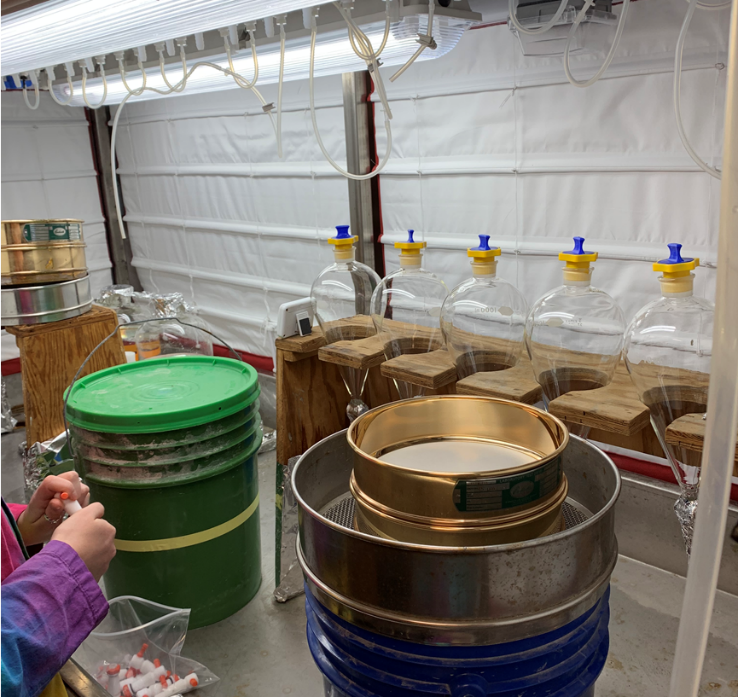 Sieves and step funnels used to separate, isolate and extract microplastics from sediment.

The Regional Research Partnership Program (R2P2) project “Supporting the Development of a National Approach to Extracting Microplastics from Sediment” worked with researchers at ORD’s National Health and Environmental Effects Research Laboratory (NHEERL) Atlantic Ecology Division’s Population Ecology Branch to test the new hybrid methodology for isolation and extraction of microplastics from subtidal estuarine sediment in Region 3. This project included the collection, extraction, and isolation of microplastics from submerged estuarine sediments along the Tidal Delaware River, located within the study area of the Delaware Estuary National Estuary Program. Fifteen sites were selected for sampling near areas of interest along the Delaware River including sites near NPDES discharge facilities, Combined Sewer Overflows, major confluences and urban areas. Field sampling and laboratory work with Region 3 was completed in June of 2019. Samples are being analyzed and results will be shared broadly with stakeholders.

The Commission for Environmental Cooperation (CEC) supported this project as a part of a broader initiative to prevent and reduce land-based sources of litter from entering the Salish Sea watershed. The CEC played a critical role in the implementation of this pilot study to characterize debris entering stormdrains in the City of Vancouver, British Columbia and Bellingham, Washington. The project was selected based on a stakeholder meeting in Vancouver on May 7, 2018 which included representatives from local, provincial, state and national governments, industry, nonprofit organizations, and youth groups, indigenous leaders and academics. During this meeting, concerned parties outlined their hopes of identifying common litter items and informing solutions on potential sources and pathways of litter entering the Salish Sea watershed. One of the low-cost, low-technology strategies coming out of the meeting included conducting a stormdrain litter characterization study. In 2018, Ocean Wise, a non-profit ocean focused organization, worked with local partners in Metro Vancouver and Bellingham, WA to install filter devices in stormdrains at ten locations throughout the study areas (5 selected in each). These stormdrain catchment devices were equipped with permeable fabric and overflow ports to allow for the routine movement of water while also making sure to capture larger-sized debris.

Information was gathered on the amount, types and sources of litter entering local stormwater infrastructure. Debris was collected by city staff daily for a week at each filter and all litter over 0.5 cm was isolated and categorized according to the Great Canadian Shoreline Cleanup data card. The results of the 70 samples of storm drain debris found that the most common types of litter found in both cities were cigarette butts, paper scraps and single-serving food packaging. Unsurprisingly, the study determined that litter associated with food-packaging was most commonly found in commercial areas near fast food establishments and other food service providers that offer takeout. This study provides further evidence that stormwater infrastructure can act as pathways for land-based litter to enter the Salish Sea watershed. Lessons learned from this study can be used to inform the use of similar stormdrain catchment devices and litter characterization analyses used to reduce the flow of litter into waterways in other regions.