The Corps of Engineers St. Louis District and EPA jointly contributed $330K to fund a dedicated UWFP Ambassador for two years from the Corps of Engineers that has been engaging organizations and agencies, making presentations on the UWFP, coordinating activities, and recruiting new partnerships in the watershed to provide technical and other assistance. This is the first time EPA and the Corps have jointly contributed funds to support an UWFP ambassador. Both agencies have found the Ambassador’s actions to have significantly contributed to the progress and success of the UWFP and their agency missions in the watershed. 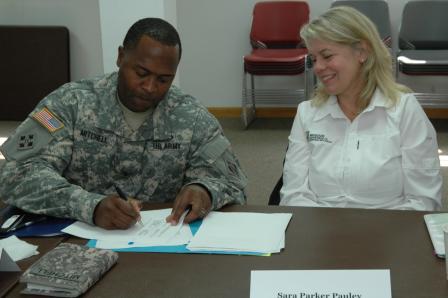 The St. Louis District Corps of Engineers executed a Feasibility Cost Sharing Agreement for St. Louis Riverfront, MO and IL Meramec Study wit the Missouri Department of Natural Resources on August 27, 2015 at the Route 66 State Park. Director Sara Parker Pauley and Col. Anthony Mitchell joined with their staff, US EPA, and stakeholders to kick off one of two Joint Feasibility Studies in the nation. This effort is also one of only ten new investments this year in the Corps Civil Works portfolio. This project will allow the Corps ad MDNR the opportunity to focus on Ecosystem Restoration at the same time US EPA focuses on remediation of lead contamination within the Meramec and Big Rivers.

This project focuses on the Lower Meramec Watershed, which drains nearly 4,000 square miles of central and eastern Missouri, including the southern St. Louis metropolitan area. A watershed management plan was completed for the Lower Meramec Watershed in July 2012, which identified ways to improve the watershed. This three-tiered collaborative project will build on community partnerships to address specific recommendations in the Lower Meramec Watershed plan by engaging in: 1) on-the-ground riparian habitat restoration through the Open Space Council’s Operation Clean Stream river stewardship project; 2) a public education exhibit of this watershed by creating and publicizing a public work of art, known as “Watershed Cairns;” 3) an assessment, analysis and technical interpretation conducted by St. Louis University.