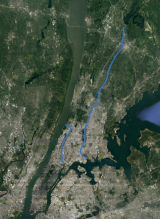 Photo Gallery for the Bronx/Harlem location.

The Harlem and Bronx Rivers are part of the larger NY-NJ Harbor Estuary Exitand Long Island Sound Exitsystem, and as such, hold enormous potential to provide open space, beauty, wildlife habitat, and a variety of recreational amenities to millions of New Yorkers.

The Harlem River separates the island of Manhattan from the Bronx, and connects the Hudson River and East River/Long Island Sound. This nine-mile long tidal strait was once a complex system of tributaries, wetlands, and meandering shorelines. Today, it has been channelized, hardened, and heavily impacted by development and industry over the last 200+ years.

The Bronx River originates in upper Westchester County and runs for 23 miles through 13 Westchester municipalities and the heart of the Bronx before reaching its confluence with the East River/Long Island Sound. The Bronx River is NYC’s only remaining freshwater river, although it too, like the Harlem River, has been negatively impacted by urbanization.

Harlem & Bronx River communities are home to an inordinate amount of NYC’s solid waste transfer, wastewater treatment, and electrical generation facilities, have among the highest obesity, diabetes, and asthma rates in NYC, and host the world’s largest wholesale food distribution center, which generates upwards of 20,000 truck trips per day. New York’s 15th Congressional District, the poorest in the nation, spans the southern portion of these two watersheds.

Led by the United States Department of the Interior, Bronx & Harlem River UWFP partners work to help overburdened and underserved Bronx communities reconnect to their waterways, reduce the negative impacts of urbanization on both water quality and human health, and restore impacted riverfronts while pursuing environmental justice.