An EPA-financed plan will help the Knitting Mill Creek watershed in Norfolk, VA, move ahead in using green infrastructure to control stormwater pollution in a community vulnerable to sea level rise.

In May 2014, EPA provided more than $60,000 in technical assistance to Lafayette Wetlands Partnership, Friends of Norfolk’s Environment, and the City of Norfolk to explore green options for improving water quality.

The mixture of land uses within the 340-acre Knitting Mill watershed creates a patchwork of impervious surfaces that limits natural infiltration of stormwater. Much of the stormwater runoff from the watershed is collected in a storm drainage system and discharged into the creek without treatment, creating algal blooms that eventually spread downstream to the Lafayette River, and spawning high levels of E.coli bacteria.

The report’s findings are expected to serve as a template for how the practices can be implemented throughout urban areas of the Chesapeake Bay shoreline.

John D. Stewart of the Lafayette Wetlands Partnership said the groups are proceeding on several fronts to keep momentum behind the report. The team has obtained $10,000 toward a demonstration buffer and walkway along Knitting Mill Creek to test materials, plants and aesthetics before committing to a full installation, and has engaged a graduate student in civil engineering to study in more depth the influence of sea level rise on green infrastructure along the creek. “Adaptation to sea level rise is in the foreground here in Norfolk, and we want to understand the life cycle of costly installations along the riverfront,” Stewart said in an e-mail. The partners are also working with the city to link up the plan’s recommendations with a living shorelines project already underway.

Norfolk was among 14 communities nationwide that received EPA support to expand the use of green infrastructure to reduce water pollution and boost resilience to climate change impacts. Norfolk, where scientists predict relative sea levels (rising water and sinking land) could rise 1.5 feet in the next 20-30 years, is also a focus of EPA’s “Making a Visible Difference” effort. The city last year received a $4.64 million U.S. Department of Interior Hurricane Sandy Coastal Resiliency Exit grant to implement eight shoreline restoration projects and develop a green infrastructure plan and network for the Lafayette River watershed improvements. 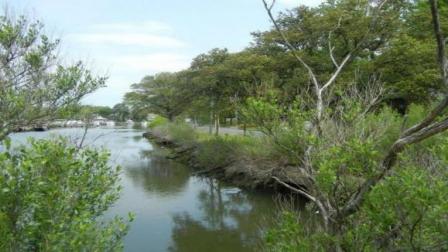