Below are highlights of our key laboratory testing capabilities: 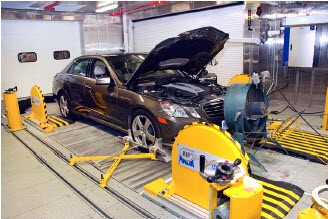 Cars and light trucks are tested on a chassis dynamometer, under tightly-controlled conditions that simulate the operation of a vehicle on the road. A dynamometer consists of one or two large rollers connected to an electric motor. The vehicle being tested drives on the rollers, which simulate the speed and resistance of an actual road. Sophisticated chemical analyzers measure pollutants from the vehicle exhaust.

To evaluate exhaust emissions and fuel economy performance in a way that is accurate and repeatable, vehicles are driven on the dynamometer over standard test cycles. This means all the cars are driving the exact same way for our tests.

NVFEL evaluates evaporative emissions of volatile organic compounds (VOCs) from parked vehicles using an evaporative emissions sealed housing emissions device (SHED). VOCs are pollutants that contribute to the formation of ground level ozone, or smog.  As its name suggests, the SHED device is an enclosure where a vehicle is parked for one or two days. During that time, the vehicle temperature of the enclosure is managed so that it simulates daytime and nighttime ambient temperatures while sophisticated chemical analyzers measure evaporative emissions to ensure compliance with regulations. 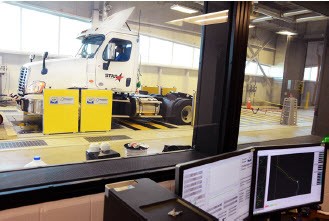 NVFEL is home to one of the largest capacity Heavy-Duty Chassis dynamometers in the western hemisphere. This dynamometer can test onroad trucks and buses weighing up to 80,000 lbs, and will be used to perform “whole vehicle” tests, as proposed in EPA’s Phase 2 Greenhouse Gas Emissions Standards and Fuel Efficiency Standards for Medium- and Heavy-Duty Engines and Vehicles.

NVFEL’s Heavy-Duty Chassis test site is one of the few heavy-duty dynamometers in North America configured with the motor in the middle of the roll set, a configuration that has become the standard for light-medium duty chassis dynamometers because of their accuracy, repeatability, and very low parasitic losses.

NVFEL’s heavy-duty facility will also be the first in North America with the capability of collecting tailpipe emissions measurements on a heavy duty four-wheel drive vehicle meeting the testing requirements of 40 CFR 1066. 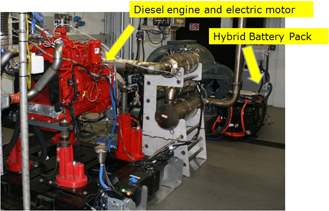 NVFEL uses various test methods and procedures for measuring the emissions from engines, ranging in size from the small gasoline engines used in lawn and garden tools to the large heavy-duty diesel engines used in heavy-duty trucks and buses, as well as agriculture and construction equipment.

Engines are typically tested under tightly-specified conditions on an engine dynamometer, meeting the requirements of 40 CFR 1065, to simulate the operation of an engine under representative conditions. An engine dynamometer is an electric motor capable of delivering or absorbing energy from an engine, simulating the speed and load experienced by an engine in a typical application. Exhaust pollutants are measured by chemical analyzers. 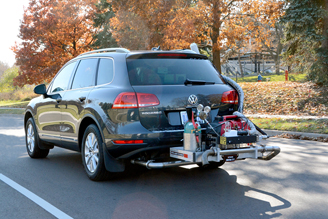 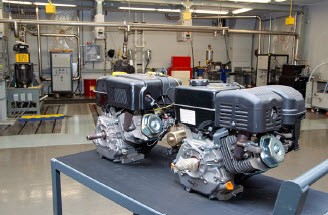 NVFEL conducts emissions testing on small spark-ignition (SI) gasoline engines (smaller than 30 horsepower) - such as those commonly found in lawn and garden tools and small generator sets - to validate the certification test data submitted by engine manufacturers. Amidst tremendous competition between domestic and overseas manufacturers to sell low-cost products in the U.S. market, EPA’s testing ensures that each manufacturer meets the same standards for clean air.

The small engine test facility meets the requirements of 40 CFR 1065 to ensure consistency and repeatability of emissions tests. As with larger engines, small SI engines are tested using engine dynamometers over special test cycles that account for typical engine operating conditions. The engine exhaust emissions are evaluated against EPA standards for hydrocarbons, carbon monoxide, and oxides of nitrogen. 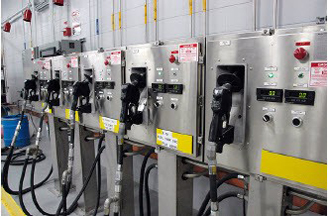 NVFEL also boasts a Fuels and Chemistry Center (FCC), which supports the Agency’s fuel quality surveillance programs and also provides the laboratory with standard test fuels, experimental test fuels, and analysis of non-regulated pollutants. The laboratory also performs extensive correlations with other fuel testing laboratories, to ensure that the industry test results compare with EPA’s “gold standard.” With the implementation of new emissions standards and the accompanying changes in the test fuel properties, along with the need for maintaining legacy test fuels, the operations of FCC have grown in both size and complexity. Accordingly, a critical part of the center’s missions is ensuring that industry is keeping pace with these changes through rigorous “round-robin” interlab correlation programs.