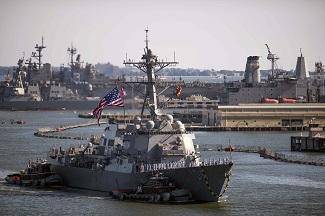 The EPA and the DOD anticipate that the standards will enhance environmental protection of U.S. waters by creating nationally protective standards for vessels of the Armed Forces. UNDS will achieve two results. The first is that U.S. Armed Forces vessels can continue to meet operational requirements. The second is that these national standards will reduce the environmental impacts associated with these discharges, stimulate the development of improved pollution control devices and advance the development of environmentally sound military vessels.

What is a marine pollution control device (MPCD)?

An MPCD is any equipment or management practice designed to treat, retain or control discharges of a vessel. The EPA and the DOD must consider seven statutory factors in determining whether it is reasonable and practicable to require the use of an MPCD.

How did EPA and the Department of Defense (DOD) evaluate the discharges?

The EPA and the DOD published Phase I of the Uniform National Discharge Standards (UNDS) rule on May 10, 1999. The Phase I rule identified all discharges incidental to the normal operation of Armed Forces vessels and characterized each discharge to determine if it required control, based on its potential to have an environmental impact. The Phase I rule also established procedures for no-discharge zones.

In Phase II, the EPA and the DOD, in consultation with the U.S. Coast Guard (USCG), are developing standards for each discharge that was determined to require control in Phase I. The standards will be established in three batches.

In Phase III, the DOD, in consultation with the EPA and the USCG, will establish regulations governing the design, construction, installation and use of MPCDs aboard vessels of the Armed Forces. These regulations will be required to meet the performance standards promulgated in Phase II. The Phase II performance standards don't become effective until Phase III requirements are in place.

What have the EPA and the DOD done to assess discharges produced by vessels of the Armed Forces?

As part of the UNDS process, the EPA and the DOD evaluated the environmental effects of the discharges and proposed performance standards for MPCDs to control these discharges. Each discharge is evaluated according to the following statutory factors listed in Section 312(n)(2)(B):

What vessels are covered by UNDS? 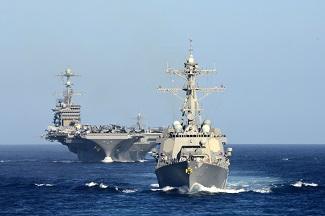 UNDS is not applicable to:

How have the EPA and the DOD involved the states?

Clean Water Act Section 312(n) preempts states from regulating the fourteen discharges identified during Phase I that do not require control and will preempt states from regulating the remaining 25 discharges once Phase III is complete. Consequently, Executive Order 13132(5 pp, 197 K, About PDF) requires that appropriate state elected officials or their representative national organizations be consulted.

Outreach efforts involving the states, territories, tribes and other federal agencies is an integral component of the UNDS rulemaking process. The EPA and the DOD have consulted extensively with state environmental agencies.

How does UNDS affect the public, the states and the Armed Forces?

United States Armed Forces vessels operate nationwide in coastal and inland waters. We believe the UNDS requirements will enhance environmental protection of these waters by reducing the major constituents of concern from Armed Forces vessel discharges that could be harmful to our coastal communities, fishing and recreational industries, wildlife and human health.

Clean Water Act Section 312(n) preempts states from regulating the 14 discharges identified during Phase I that do not require control and will preempt states from regulating the remaining 25 discharges once Phase III is complete. States, however, can petition the EPA and the DOD to review whether or not a discharge should require control by an MPCD. Additionally, the Phase I rule established a process through which states may request the establishment of no-discharge zones (where any release of a specified discharge is prohibited).

USS Boxer (U.S. Navy photo by Mass Communication Specialist 3rd Class Veronica Mammina/Released)Ultimately, 25 performance standards will be promulgated for discharges from Armed Forces vessels. While operating in inland waters or within 12 miles of shore, Armed Forces vessels will be required to meet the performance standards. UNDS standards will advance the ability of the Armed Forces to better design and build environmentally sound ships, to train crews to operate vessels in a manner that is protective of the environment and to maintain operational flexibility both domestically and internationally. Additionally, UNDS is expected to stimulate the development of innovative vessel pollution control technologies.