EPA tool helps developers and others tap green infrastructure to manage stormwater runoff and plan for a changing climate. 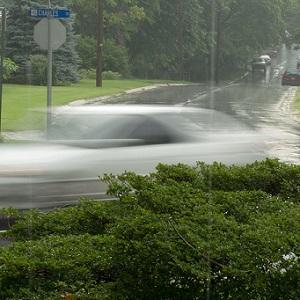 On August 11, 2014 the City of Detroit experienced its rainiest day in 89 years, receiving more than four inches of rain. Just a day later, the City of Baltimore reported almost half a foot of rainfall, the second highest daily amount reported since records began in 1871. Both cities, particularly in low-lying roads, parking lots, and other areas, experienced destructive and dangerous flooding.

Climate change is anticipated to spark an increase in the frequency and intensity of such large-scale rain events, challenging municipalities to find innovative, efficient, and affordable ways to reduce the amount of runoff flowing off the pavement, rooftops, and other impervious surfaces of existing and new developments.

EPA researchers are working to help. They developed the National Stormwater Calculator to provide decision-makers and others with an online tool to assess the impact of incorporating green infrastructure features, such as rain gardens, rain barrels, cisterns, and open parks, into their projects. The cumulative impact of incorporating such practices could help to immediately reduce stormwater runoff. This, in turn could help reduce the amount of excess nutrients and other pollutants that runoff can collect and deliver to local waterways.

The free tool is designed to be used by anyone interested in reducing runoff from a property, including site developers, landscape architects, urban planners, and homeowners. The calculator provides estimates of the annual amount and frequency of runoff from any location in the United States (including Puerto Rico), based on information collected about the selected site, such as local soil conditions, slope, land cover, and historical rainfall records. 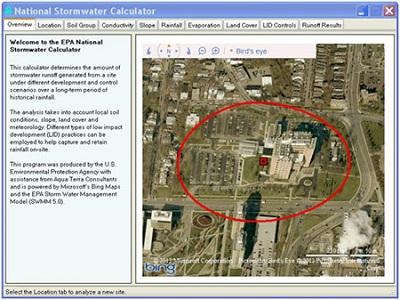 Consider a developer planning to build a library and parking lot on what is currently an overgrown, former agricultural field. When a location is selected, the Calculator automatically adds data, such as soil type, slope, and weather. The user then adds information on existing or planned impervious cover. In this example, the developer may find that conversion from field to library leads to greatly increased runoff from the site, perhaps even exceeding local ordinances. Using the Calculator, they can then explore alternative development plans, such as trading some paved parking spots for green space, incorporating permeable pavement into the design, and adding rain gardens and rain barrels.

By running alternative scenarios through the Calculator, users get a picture of how they can add green infrastructure into their plans to reduce runoff.

“Climate change threatens our health, our economy, and our environment,” said former EPA Administrator Gina McCarthy when announcing the release of the update. “As part of the President’s Climate Action Plan, this tool will help us better prepare for climate impacts by helping build safer, sustainable, and more resilient water infrastructure.” The Calculator’s January 2014 update incorporates the ability to select future climate vulnerability scenarios. This feature can help communities identify how they can take action now to plan for the future in the face of a changing climate.