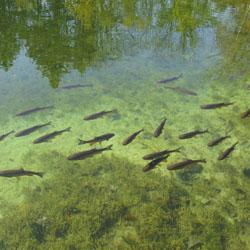 When chemicals enter water systems, they can pose risks to organisms that live there. These chemicals, either on their own or in mixtures, are usually measured by chemical analysis to determine the concentration of each substance.

Although these traditional measurement methods are able to detect a given amount of chemical in a water sample, they cannot determine exposure. Natural processes, such as decomposition and reactions to sunlight, decrease the chemical concentration in water samples, which creates uncertainty for scientists estimating exposure and risk of chemicals in aquatic environments.

EPA scientists have found that certain chemicals can be grouped together based on how they affect the organisms that absorb them, and the frequency with which they can be found in and near aquatic ecosystems. When certain organisms and animals are exposed to particular chemicals, such as certain pesticides, some of their cells undergo observable changes.

EPA scientists have developed a method using new technology to examine sensitive and chemical-specific biomarkers of exposure. These methods can screen for molecular-level changes in aquatic organisms, and tell scientists not only about the concentrations of chemicals in the aquatic ecosystem, but also about how these chemicals are affecting the organisms living there.

EPA research indicates that chemicals and chemical mixtures generate identifiable molecular profiles in organisms that are exposed to them. These biomarker-based methods have been shown to reliably distinguish between exposed and unexposed organisms. The methods also enhance scientists' ability to determine the sources of impairments in exposed organisms.

Using these cutting-edge new molecular methods, EPA scientists plan to develop a modeling system that can be used to identify ongoing and recent exposures to chemicals in aquatic ecosystems. This modeling system will be used alongside existing monitoring and testing methods, and will also be able to differentiate between chemicals or chemical groups when exposures occur as part of complex mixtures. This modeling system will give scientists a much-needed tool for assessing the biological context for chemical exposures in aquatic ecosystems.