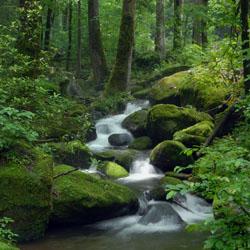 Headwater streams are the smallest parts of river and stream networks, but make up the majority of river miles in the United States. They are the part of rivers furthest from the river's endpoint or confluence with another stream. Many headwater streams have been lost or altered due to human activities such as urbanization and agriculture, and this can impact species and water quality downstream.

Watershed managers have had little guidance to help protect headwaters or assess their condition. Because there are so many headwater streams, monitoring all of them for health and permanence is impractical. Therefore, other methods are needed.

EPA ecological exposure scientists have developed tools for assessing the quality and permanence of headwater streams to provide guidance for regional, tribal and state agencies in protecting these precious resources. Many headwater streams are prone to natural drying because they lack year-round connections to groundwater and don’t have permanent flow. This can make it difficult or impossible to use traditional methods of stream health assessment.

To gather information for the development of these assessment tools, EPA scientists conducted a pilot study in four forests in many areas of the United States. These pilots focused on developing indicators of headwater permanence and health — including environmental indicators and living organism indicators. Environmental indicators include rock, water, soil, and chemical features of forested headwater streams. Living organism indicators include organisms that live in these streams such as algae, bryophytes (mosses and liverworts), invertebrates (insects, worms, snails) and amphibians (salamanders and frogs).

Field Operations Manual for Assessing the Hydrologic Permanence and Ecological Condition of Headwater Streams (Fritz, Johnson, and Walters, 2006) and several peer-reviewed journal articles. The manual provides background and a catalog of procedures that can be used to assess the health of headwater streams. The manual and journal articles provide guidance to states, tribes, EPA Regions and other groups with an interest in headwater stream assessment. The published tools include information about when to use each method and how to interpret data generated by the methods. This work has also aided research on streams in areas influenced by mountaintop mining.