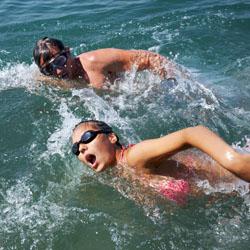 Using mussels to detect microbial contamination of ambient water
Mussels, oysters, clams, scallops and other bivalves are efficient natural filters that can "clean" up to five liters of water per hour while they feed on microscopic plants and nutrients in water. EPA scientists are taking advantage of this ability by developing a low cost, effective concentration method using native and invasive species, like blue mussels and Asian clams to collect an array of microbial pathogens from water.

Sample preparation techniques for concentrating microbes from water
Pathogenic microbes can potentially pose a risk to public health, even when they are present at very low levels in the environment. To know what microbes are present in a given water matrix, methods are needed that will effectively remove most of the water while retaining microbes in a given sample. EPA scientists are investigating several alternative approaches separating microbes from water more effectively. They are also evaluating techniques that allow different types of microbes, such as viruses, parasites, and bacteria to be isolated. This work has resulted in the identification of low cost alternative sample concentration techniques.

Saliva-based measurement method for detecting exposure to waterborne pathogens
Exposure scientists at EPA have developed a quick, inexpensive method to sample swimmers’ saliva to understand the links between exposure to pathogens in water and human health. Using swabs of saliva, which can be collected quickly and non-invasively, scientists can look at specific antibodies created by the immune system in response to exposure to certain microbes.