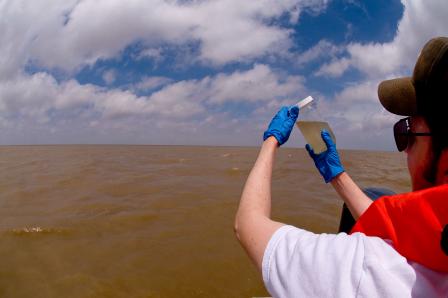 EPA researchers have created a state-of-the-art three-dimensional model of the oxygen starved waters in the Gulf of Mexico. Each summer, as the waters warm, nearly 8,000 square miles of water becomes a dead zone killing bottom-dwelling marine life and pushing others further out to sea. This dead zone has been well-documented for years, but now EPA researchers have developed a 3-D model to better predict where the dead zone will occur each year and ways to reduce its negative effects. The model was developed in partnership with physical oceanographers at the U.S. Naval Research Laboratory.

1.  Carbon Dynamics on the Louisiana Continental Shelf and Cross-Shelf feeding of hypoxia (2015) - Using data from five late July shelf-wide cruises from 2006 to 2010, carbon and oxygen production were examined and net autotrophicareas of phytoplankton growth on the Louisiana shelf were identified.

4.  Microphytobenthos production potential and contribution to bottom layer oxygen dynamics on the inner Louisiana continental shelf (2014) - To investigate the relative importance of microphytobenthos (MPB) oxygen production on a river-dominated shelf, sediment core incubation measurements of MPB O2 production and sediment oxygen consumption were compared to water-column measures of primary production and respiration during one spring and two summer cruises.

5.  Nutrient distributions, transports and budgets on the inner margin of a river-dominated continental shelf (2013) - Physical and biogeochemical processes determining the distribution, transport, and fate of nutrients delivered by the Mississippi and Atchafalaya river basin to the inner Louisiana continental shelf were examined using a three-dimensional hydrodynamic model and observations of hydrography, nutrients, and organic carbon collected during 12 cruises.

7.  Sediment-water fluxes of dissolved inorganic carbon, O2, nutrients, and N2 from the hypoxic region of the Louisiana continental shelf (2012) - One of the largest coastal hypoxic regions has been observed during the summer in the bottom-water of the Louisiana continental shelf.  In this study, the sediment-water fluxes of dissolved inorganic carbon, oxygen, nutrients, and denitrification were measured on the Louisiana shelf during six cruises from 2005 to 2007.