The national coverage of the NHDPlus Flow Direction Grid provides a foundation for evaluating the probable course of surface water flow. Given a point anywhere on the flow direction grid, a "downhill" path may be determined to associate an arbitrary hydrologic event with NHDPlus features. WATERS utilizes an application known as the "Raindrop Tool" to traverse the flow direction grid and determine an appropriate spatial intersection with NHDPlus hydrologic features. While a powerful tool for indexing and creating spatial relationships, the raindrop tool requires some explanation of usage, limitations and best practices.

The Raindrop Tool is exposed as part of the Point Indexing Service. Review the documentation and view live examples of the service in action at the WATERS code playground Exit.

The underlying dataset utilized in by Raindrop Tool is the NHDPlus Flow Direction Grid. Raindrop tool users should familiarize themselves with the full documentation located at the NHDPlus website.

The logic to travel the grid from cell to cell is quite simple. Depending on the value of a given raster cell, the application may move from cell to cell in any of eight directions continuing onward until either the maximum raindrop distance is travelled or until a grid sink is encountered. Grid sinks are special no-data grid values indicating that no further traversal is possible. NHDPlus processing has placed grid sinks on ocean coastlines, outflows to foreign countries, certain isolated networks and at the previously mentioned outflows between production units. 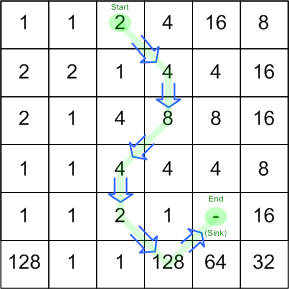 The goal of most raindrop actions is to find the path to the first NHDPlus flowline feature along a grid traversal route. The raindrop tool algorithm functions in the following manner:

* All raindrop actions are initiated with two parameters: "maximum raindrop distance" and "maximum snap distance" (both in kilometers). Together these parameters may be used to tune the Raindrop Tool results.

The NHDPlus Dataset represents flowline hydrologic features without width, meaning that a feature such as the Mississippi river is abstracted to a single line. However, the Flow Direction Grid does represent the descending nature of the entire feature channel. The raindrop application can return peculiar results when the flow direction grid's channel does not immediately intersect with the NHD feature geometry.

For instance when approaching a channel ideally the Raindrop application would find grid values that would it allow it to tie reasonably to the linear feature representing the channel.

However because the grid values attempt to show the actual course of the channel, the Raindrop Application may occasionally parallel the targeted feature for a distance before coming close enough to make the connection.

As an example, here is an attempt to use the Raindrop Tool on the northern shore of the Chesapeake and Delaware Canal. Only after travelling for two miles to the west does the application "find" the NHD feature. 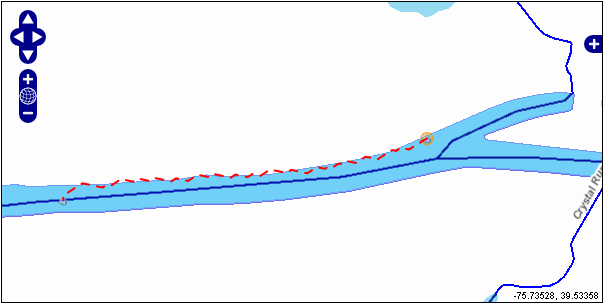 For example, the following Baltimore-area Raindrop traversal might appear quite reasonable when only looking at hydrographic features. 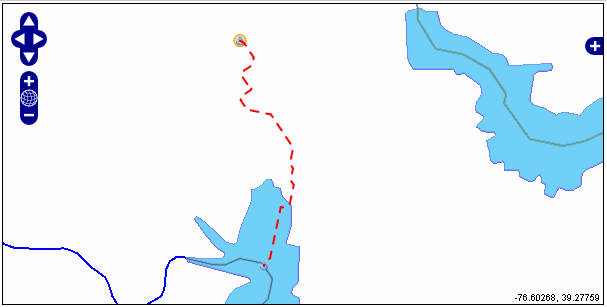 However, when we overlay an aerial photo on the situation, things are not nearly so reasonable. 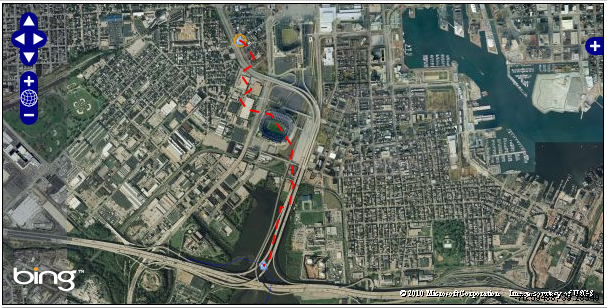 In this case it seems doubtful that surface water is flowing across the urban landscape in this manner. 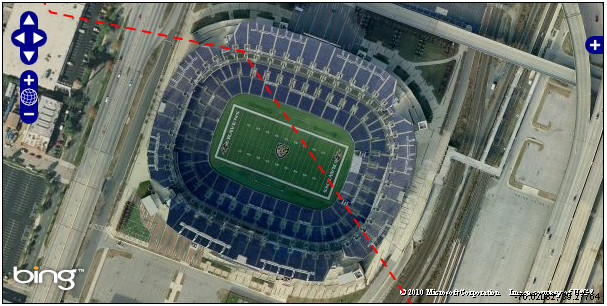 However the basic message that surface water should flow south to Rigley's Cove rather than to the closer NHD feature of the Inner Harbor to the east may be of value. Raindrop tool processing in urban areas should be examined closely to determine if results match task requirements.

As previously mentioned, the Flow Direction Grid has been constrained to the coastlines by the placing of sinks. However, quite often hydrologic events occur offshore beyond these sinks. The Raindrop tool has no ability to do anything with such inputs and will return a "Flow Direction Grid Out Of Bounds" error. In these cases the recommended work-around is to run the Raindrop tool and if this error is encountered, run a distance snap instead.

Best practices will continue to be refined as the tool is exercised with this section updated as appropriate. However, current usage of the Raindrop Tool suggests the following: