The first step in changing the way you use water in the future is by understanding how much water you use today. The best place to find this information is on your monthly water bill.  Pull out your water bill and follow the steps below to learn more about it and your own water use. 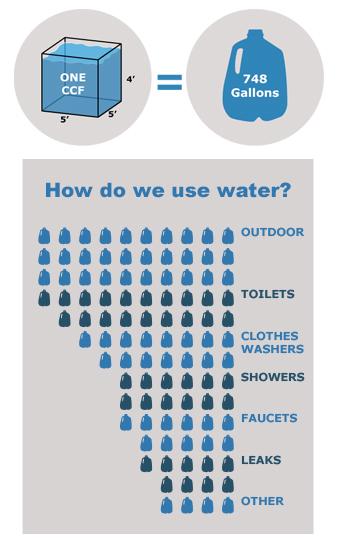 Different utilities use different units for measuring water use. The most common units are centum cubic feet (CCF) and the gallon. A CCF also called an HCF (hundred cubic feet), represents one hundred cubic feet of water. The first "C" comes from the Roman word for hundred, "centum.” This is the most common unit used by both water and natural gas utilities. But you may be more familiar with the other unit, the gallon. One CCF is equal to 748 gallons.

What does your usage mean? The average American uses around 88 gallons per day per person in the household. That means a family of four would use around 10,500 gallons in a 30-day period. But usage varies a great deal across the country, mostly because of differences in weather patterns. For example, water use tends to be higher in drier areas of the country that rely more on irrigation for outdoor watering than in wetter parts of the country that can rely on more rainfall.

Based on information from Water Research Foundation, “Residential End Uses of Water, Version 2.” 2016; and The US Geological Survey, “Estimated Water Use in the United States.” 2010.

Does your bill explain your household's usage trend? Some utilities provide graphs like the ones below that show how your water use has varied over the course of the year and previous years. This can be a helpful way of seeing when your own water use reaches its highest levels.

While using water efficiently is important throughout the year, sometimes the timing of water use can make a big difference for community water supplies—and your water bill. WaterSense has tips to help you reduce your water use when it's hot outside.

Water utilities operate with this higher, summertime use in mind because they must be able to provide for all the water a community needs over an extended period. Some systems may be forced to restrict outdoor watering during the peak to ensure that water is available for more important community needs.

How does your use compare to that of your neighbor? 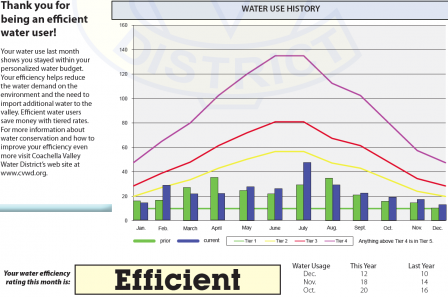 How are you being charged?

Water utilities need to charge customers to build and maintain infrastructure—the water storage tanks, treatment plants, and underground pipes that deliver water to homes and businesses. The revenue is also used to pay the workers who provide you with water service day or night. There are a wide variety of rate structures that are used to bill customers, some of which are described below.

Flat Fee is a rate structure where all customers are charged the same fee, regardless of the amount of water used. Flat fees are the simplest type of rate structure and are rarely used today. They generally don’t provide revenue sufficient to operate the utility and are not good at promoting water efficiency. 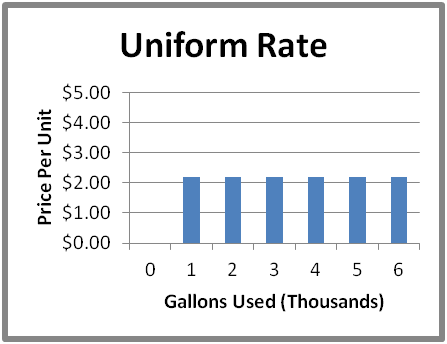 Uniform Rate is a structure that has a constant per unit price for all metered units of water consumed on a year-round basis. It differs from a flat fee in that it requires metered service. Some utilities charge varying user groups different rates such as charging residential households one rate and industrial users a different rate. Constant block rates provide some stability for utilities and encourage conservation because the consumer bill varies with water usage.

Declining Block Rates are the opposite of increasing block rates where the unit price of each succeeding block of usage is charged at a lower unit rate than the previous block(s). This rate structures are popular in rural areas that service large farming populations or areas with large users such as heavy industry and where water is plentiful.

Seasonal Rates are rates that cover a specific time period. They are established to encourage conservation during peak use periods. Examples of seasonal rates may be increases for the summer season due to increased demand associated with lawn watering and outside activities.

Drought Rates are similar to seasonal rates but instead of applying higher rates during an entire time period, they adjust rates based on the local area's drought level. Higher levels of drought result in higher prices for water in order to encourage conservation.

Water Budget Based Rates is a rate structure where households are given a "water budget" based on the anticipated needs of that household either by the number of people living in the house and/or property size. Users are charged a certain rate for use within their budget and a higher rate for use that exceeds their budget.

Many utilities use a combination of a fixed fee (base) and a variable fee (volume) for their water rate structure. Fixed charges generally include the price the customer pays as a base charge to help cover costs for maintaining existing infrastructure and repaying loans and bonds used to build that infrastructure. Variable charges are the price the customer pays per volume of water used, which reflect the costs of providing water, such as costs for chemical treatment to provide safe water and energy to move and deliver water.

What are my charges going towards?

Most utilities will provide you with a breakdown of charges in your "billing detail" or "summary of charges" section. Note that some utilities measure both water entering the house and waste leaving to the sewer, but many utilities have only one meter on location and will charge both volumes based on water entering the house. This is yet another reason to reduce your own water use.  If you're curious about what various surcharges and other charges on your utility bill mean, you can usually find that information either on the back or appendix of the bill or on your local water utility's website.  Two examples are provided below. 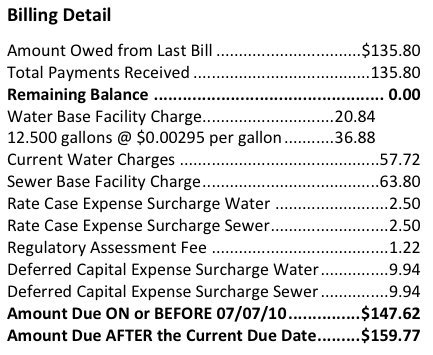 Uniform Rate Example - in the first example, roughly half of the $147.62 being charged is directly related to water use. Most utilities charge a set flat fee (the "Water Base Facility Charge" in the example) that helps to pay for the base costs of providing water including the electricity needed to transport and clean the water, the personnel and others costs of daily maintenance of the delivery system, and other fixed operating costs.

This utility uses a uniform rate structure that charges the user $0.00295 per gallon (or roughly 3 cents for every 10 gallons) used during the billing period. The bill also shows a similar facility charge for sewer and a "rate case expense surcharge" to help pay for the utility's rate setting process. The "regulatory assessment fee" helps the utility pay for costs associated with maintaining regulatory compliance with clean water statutes. Finally, some utilities charge fees similar to the "Deferred Capital Expense Surcharge" which puts money into a fund to help pay for long term investments in improvements to infrastructure such as new pipes, treatment facilities or reservoirs. 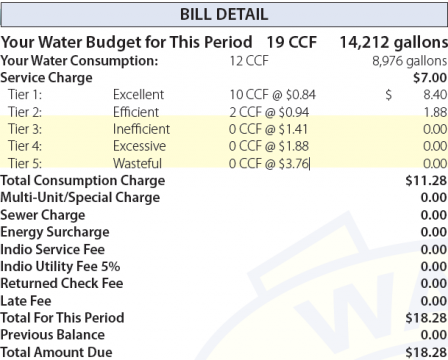 Increasing Block Rate Example - this second bill is an example of an efficient user with an increasing block rate structure. You can see that the utility has even labeled the various blocks with its corresponding water use efficiency level. The above user falls into the "Efficient" group and so avoids the much higher per unit costs of the next three tiers. Some utilities will forgive various surcharges for its most efficient users because their below average water use places less burden on the system and reduces demand for new sources of water and pipes to transport this water. 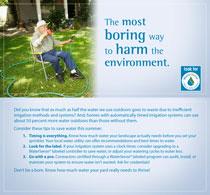 Utilities will often use the back of the bill as a "message area." This area will sometimes have information on rebate programs, water efficient products, or other tips on water conservation.

If you're looking for more information on how your bill functions, you can visit the following sites: