Bald Cypress trees often have buttresses, like the ones in this picture, and knees. 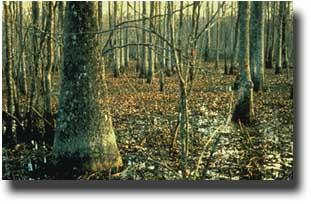 The rings on the bases of these trees show that the water level is often higher in this forest.

Bottomland hardwood forests are river swamps. They are found along rivers and streams of the southeast and south central United States, generally in broad floodplains. These ecosystems are commonly found wherever streams or rivers at least occasionally cause flooding beyond their channel confines. They are deciduous forested wetlands, made up of different species of Gum (Nyssa sp.) and Oak (Quercus sp.) and Bald Cypress (Taxodium distichum), which have the ability to survive in areas that are either seasonally flooded or covered with water much of the year. Identifying features of these wetland systems are the fluted or flaring trunks that develop in several species, and the presence of knees, or aerial roots. 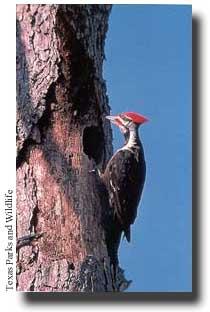 The Pileated Woodpecker (Dryocopus pileatus) can be found in swamps and other forested habitats. 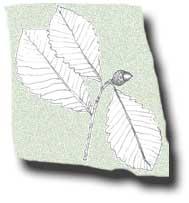 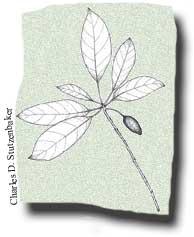 Bottomland Hardwoods serve a critical role in the watershed by reducing the risk and severity of flooding to downstream communities by providing areas to store floodwater. In addition, these wetlands improve water quality by filtering and flushing nutrients, processing organic wastes, and reducing sediment before it reaches open water.

Two hundred years ago, magnificent bottomland forests covered almost thirty million acres across the Southeastern United States. Today, only about forty percent of that area still supports these productive and unique ecosystems. Is is estimated that losses of these swamps reached rates as high as 431,000 acres per year from 1965 to 1975, largely due to conversion to croplands, particularly for soybeans. In some regions of the lower Mississippi floodplain, only a very small percentage of original bottomland hardwood forests remain.